Continued from previous Noel's Day in Office
Noel opened his eyes. He could not see well but definitely could smell EJ. Soon there were a lot of discharge. A trip was made to his vet who said this could be an indication that his respiratory system was weak and may have other problems as he was exposed outdoors when born for few days and nights.
Learning to walk was on EJ's mom's big bed. Note his infected eyes which was being treated with antibiotic eyedrops. 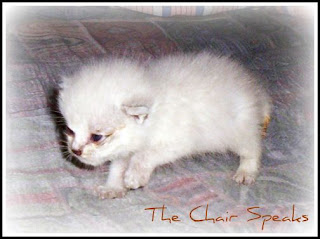 EJ then noticed there was a change in colour in Noel's little tail. And off to his vet again. His tail at the tip was suspected crushed.
Since he was so young, nothing much could be done except cleaning it with antiseptic liquid hoping that the dead tissue would drop off on its own without spreading or infecting his blood and then healed itself. EJ had to monitor it closely to try to arrest the spreading to higher up his little tail. 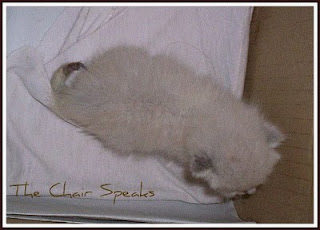 EJ's fears came true. Gangrene set in and spread. His tail had to be docked. Even after much discussion on the best way to have his gangrene tail removed, EJ left it to the vet's professional judgement. Noel was too young to go under anaesthesia and the shock of snipping the tail off without anaesthesia could cause cardiac arrest.
This was how Noel's tail looked like before the operation. The tail reminded EJ of a scorpion ready to sting. 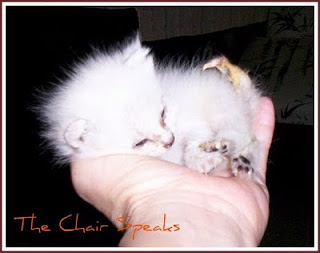 At four weeks' old, Noel had his tail docked. Poor thing, he went through so much so young. This was taken three hours after his tail was snipped without anaesthesia and stitched. Can you see that one sole stitch sticking up? 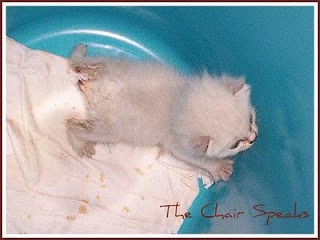 Those stains were his blood. That was one tough Noel. EJ couldn't wait to see him grow up and wondered how his stump of a tail would look like.
This little tyke was extremely tough to handle. Even his vet said so as his tiny limbs clawed non-stop. All the claws were razor-sharp and EJ's hands were slashed each time during feeds or cleaning.
To continue on Friday on Noël is Not Alone

For more cat stories, please visit http://gattinamycats.blogspot.com here
Posted by The Chair Speaks at 11:32 AM

I can't wait for little Noel to grow up, he is one lucky kitty. Thanks EJ for taking care of Noel.

I feel like reading a book ! Poor little Noel, he had a hard baby time ! Arthur was bitten in his tail 3 years ago and he almost lost it, but the vet could heal it although it's now hanging on his back in a curve he can't put his tail straight anymore. But that doesn't bother him in his adventures ! BTW you couldn't pick him up, he hates to be carried even by me !

Poor baby Noel...We hope the rest of his precious life will be an easy and happy one!...Happy week and kitty kisses, sweet friends...Calle, Halle, Sukki

Bonjour dear friends!
So lovely story, thanks so much for sharing.
Noel is a brave little friend, and adorable!
I miss you so much!After some days off, mommy and I are trying to catch up with blogging, but mommy said she has lots of laundry to do yet! :(
Anyway...I'm so happy because we are here now!
purrs and love
Luna

Poor little Noel but he is lucky to got you to be his mum who gave him a great good care. One thing, I sure about it him, He will grow up to be a happy cat because he has a great mum : )

almost tear while reading about this tiny noel.. thank you for the great story.. couldn't wait for the next entry..

Oh poor poor poor little thing!:-(
Me and Charlie are in tears for him! What a brave beautiful and sweet little kitty!!! What a sweetheart!!!

And what a story so far.

Purrs and hugs to you all!

Poor little Noel. He sure is a tough little kitten. He really had a lot of things wrong with him EJ, you sure are a special person to take such good care of him. We hope he gets better now without any more set backs. Purrs and hugs coming your way Noel and EJ too.
Have a great day.

I have so enjoyed reading your story, you could really make a book of it! You are so kind to keep on going with all poor Noel had to endure so many many people would not.

My goodness, poor little Noel went through so much at such a young age! Poor sweetie was so lucky to have EJ!

What a story!! Noel MUST be a tough kitty! I have a white cat (who was rescued) who has a very short tail that is bent in a curve. It feels diwlike it could have been broken in two places.

I have not had a kitten that size since I was a teenager---in the late '70s. I had forgotten how sweet and cute they are. Noel is certainly a tough baby.

Oh Noel
What a story.
I cannot wait for the next installment.
You have my total respect.

Yes, I can only repeat what everyone else has already said: Poor little Noel! Such a lot of trauma in the first few weeks of life. And EJ, you deserve some sort of Kitty Nobel Prize for your kindness. :-)

This poor little one! I'm so happy he had EJ but sad that he had to endure so much. I'm looking forward to the next installment!

Oh my gosh! This is such a heart wrenching story. I am praying for Noel who is so lucky to have you.I know that the love you give will be more than enough to help Noel overcome all the trauma.

Thanks so much for always commenting on my blog. I have had allot on my plate - need to get back to commenting.

To anyone reading this - please visit my blog about a colony of abandoned/feral cats near my home. And you might decide to sign on as a follower to my blog since it has stories and information helpful for cat caretakers everywhere.

Noel has had to go thru so much so young. Waiting for the rest of the story to unfold!!!!!

Poor little thing to have to suffer through many things even though he's so young. I do hope he'll be ok soon. You're a wonderful person and I think Noel is lucky to have you.

awww....poor little Noel. I don't remember, did he grow up to be an adult or has he already passed on a few years ago? I think he's not amongst your 8 cats anymore, right? I'm quite confused with so many....I can only manage to remember 2 names, that's also why I can only keep 2 cats. :))

He was such a precious little baby. I just can't imagine the pain he must have felt when his tail was docked.
I am awaiting Friday's installment of this wonderful heart touching story.