His absence hit both Winnie and human hard.
Winnie howls for no reason and is clingy to EJ. Our human tries hard to give as much cuddles as possible.

Below are photos taken just before Jack got sick. 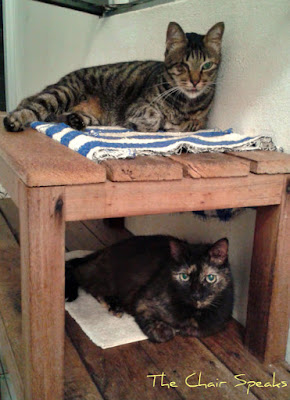 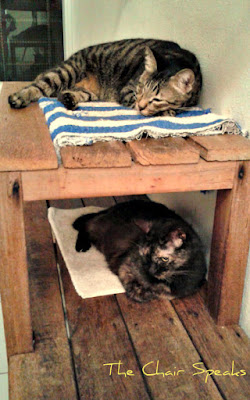 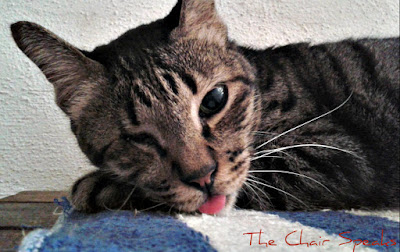 Dreaming of Christmas just before drifting off to sleep.

Merry Christmas everyone and Happy New Year.
Posted by The Chair Speaks at 7:09 PM 16 comments:

All seem well after his short-turned-long ordeal at the clinic (see previous post) with Captain Jack drinking and eating on his own including passing out bloody urine. The only problem was he fought hard in refusing to take his pills.

Jack passed out some crystals (tiny stones) with blood-stained spots of urine.

More than a week later, Jack was squatting frequently trying to urinate but only droplets of blood-stained urine came out.

He had to have his bladder drained again. This time an ultrasound was done. It showed the normal shape of bladder, both kidneys and liver. Blood test was done and the results showed an extremely high creatinine. 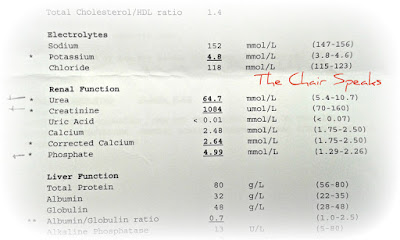 Though not his former self, Jack would still jump up to his favourite perch but eating less. More than a week later, he started to strain to urinate again, this time EJ noticed foul smell emitting from his mouth. He was taken back to the clinic again.

Without a choice, Jack had to have his bladder drained again. It was found that he had ulcers in his mouth; tartar was removed. He was also given a stronger dose of antibiotics. As he was waking up from his anesthesia, Jack kept kneading the air just like when he kneaded EJ.

Back home he did not have much of an appetite and preferred to drink water.
Jack became rather clingy and sought our human's attention constantly. The next few days he had incontinence and had to wear diapers.

Now in his diapers, he preferred to use the bigger specially constructed toilet lined with expensive hand-drawn Italian tiles. 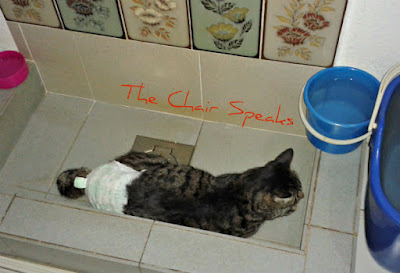 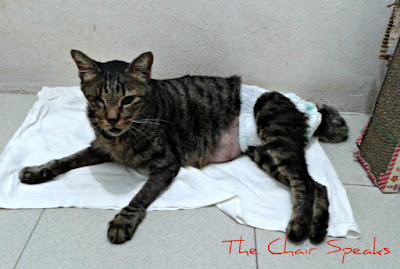 EJ stayed with him till midnight and he passed on at the wee hours on 9th December 2017 after EJ went to bed.

PS: to continue next week
(Jack had this problem four years ago and was on special diet since then).
Posted by The Chair Speaks at 12:18 AM 14 comments: