Tanya did not go in but walked away and sat down to watch. Captain Jack Sparrow HAWK then sat looking out of the tent with a smirk on his face. 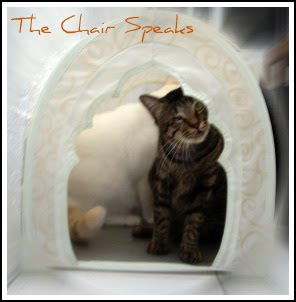 Finding it too hot for his liking in the sweltering tent heated by the direct rays of the midday scorching sun, Tommy decided to walk out to a cooler area. 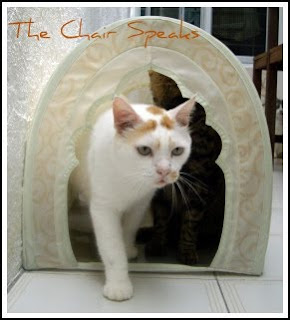 With the tent all to himself, Captain Jack Sparrow HAWK could now lay down to relax at the same time (one) eyeing Tommy who was just outside (foreground) which was cooler and shaded. 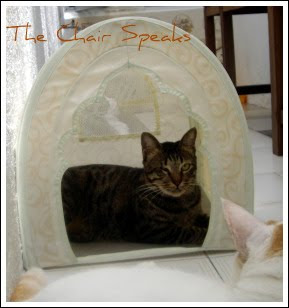 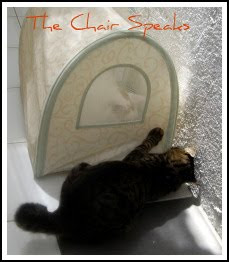 Not to lose out, Captain Jack Sparrow HAWK kicked and bit the tent...furiously. 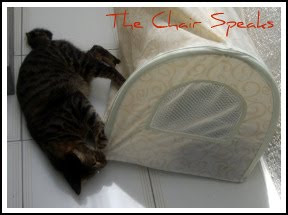 This was the result...in less than an hour. 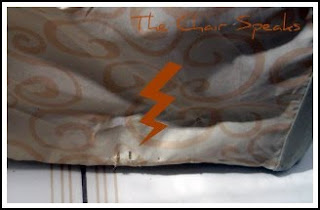 More to come in Part III.
Posted by The Chair Speaks at 7:12 PM 4 comments:

EJ visited an old primary classmate and bought breakfast so that they could eat together while chatting about old times.

There was a gift waiting for EJ; not exactly for EJ but for the cats. It was a tent that was too small for the dog and perfect for cats.

It is a beautiful tent with a mesh on the opposite side of the opening. 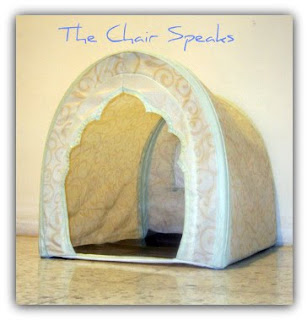 On reaching home, EJ immediately set the tent up and this was what happened. All seven cats crowded round it busy sniffing away.

Cinders did not join in the fun but sat up on the bench watching. At 15 years' old, she probably felt it would be too exhaustive for her. 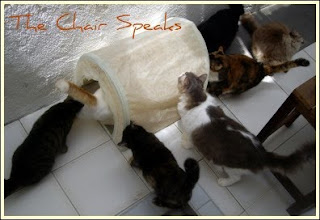 Tommy and Tortie, the two largest cats, went in together and the tent is large enough to accommodate both. 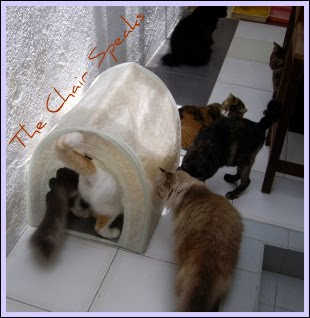 Tortie came out, Captain Jack Sparrow HAWK went in with Tommy still inside. Tanya was eyeing both of them undecided whether to cramp in or wait for them to come out. 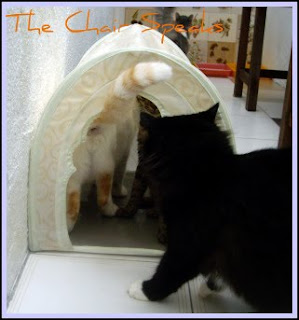 More will be posted later about what happened to the tent.
Posted by The Chair Speaks at 12:12 AM 4 comments:

During last year's Hari Raya, EJ's Malay neighbours celebrated by going back to their respective hometowns. All of them stayed for almost a week.

On the first day of Hari Raya, EJ promised to take the lady, EJ's mother, for breakfast. When EJ got out of the house, a cat who was seated on the road outside the gate, walked up and greeted with a mew. EJ then looked at the neighbours' houses on the left and right. Doors and windows were closed and locked. This pet was home alone.

How could a request for food on the first morning of a celebration be refused? So off EJ went to unlock the house, brought out some cat kibbles and fed the cat.

EJ then left the cat who was happily eating its first Raya meal of the day.

It was past noon when EJ came home after fulfilling the food and outing promise. Just before entering the house, EJ noticed the porch seemed different. On closer investigation, that cat after its full breakfast was snoozing in the shade between the flower pots at the corner of the porch. Though EJ nudged and prodded, that cat refused to budge. It just lifted its head slighty, opened the eyes a little, mewed softly and promptly went back to sleep. And refused to respond on further nudging.

EJ stood staring at the cat, wondering what next to do and noticed the cat was extremely dirty. The white cat was grey possibly from rolling on the road and dirt. Then it struck EJ that whatever EJ did to the cat, no one would know since its owner and most neighbours were away.

Without hesitation, EJ went into the house, prepared a pail of warm water, took out the bottle of medicated cat shampoo, some old towels and brought them all out to the porch. With one smooth move, EJ picked up the cat and gave it a super quick bath. The cat was being lathered when it woke up and realised what was happening. There was no struggle or claws. The cat was probably too full and shocked at its first bath in its entire life to protest. It gave a couple of soft mews though.

After the rub down with towels, the cat was set free. It sauntered through the gate while flinging its paws to rid the excess water. It stopped momentarily on the road to lick itself and paws. 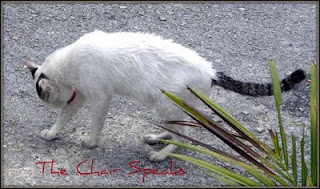 It then sat on the clean cement kerb and continued licking under the scorching midday sun. 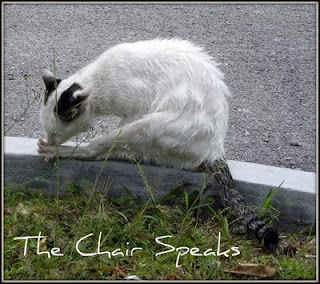 When the heated cement kerb became too hot for its behind, the cat moved to the cooler grass while licking itself constantly. 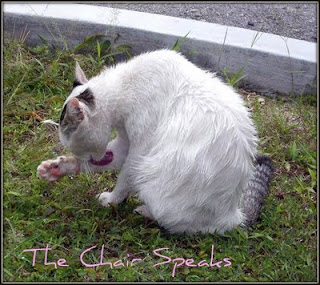 It then stopped momentarily, turned its head to look at EJ and mewed softly to say 'thank you'. 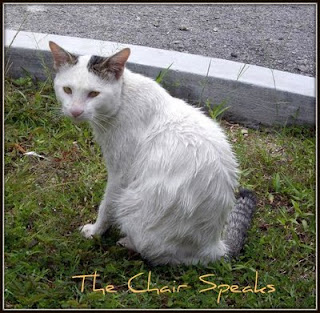 The Chair and friends – Cinders, Tommy, Tanya, Tortie, Pebble, Winnie, Kenggy and Captain Jack Sparrow HAWK – wish all Muslims 'Selamat Hari Raya' and others 'Happy Holiday'; and would also like to remind those with pets not to leave your pets home alone. Do make arrangements for friends or relatives to look after them, or board them.
PS: After that wake-up bath, that cat came back almost everyday to ask for food. A few months later one day, it stopped coming and was nowhere in sight.
Posted by The Chair Speaks at 1:41 PM 6 comments: