I Love my Letter Box 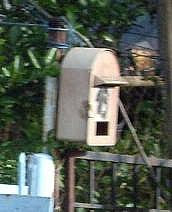 During our grandparents' time, news were mostly conveyed through radios and hand-written letters were delivered by post.

Nowadays with advanced technology, news were sent efficiently and quickly. But each house still has a letter box for the postman to deliver mail.

EJ believes that everyone still look forward to the postman delivering letters as there is a feeling of warmth and a special touch of happiness in opening a friend's handwritten letter or postcard.

Unless houses were constructed with the letter boxes concealed in gate 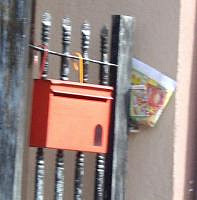 pillars like in many modern housing estates; most people would prefer to buy their own choice of letter box. Letter boxes are sold in a basic box shape but with slight variations. 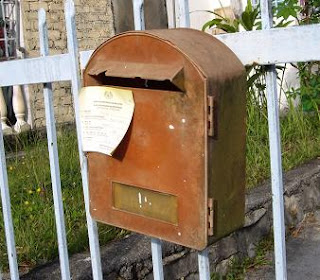 When EJ's brilliant red plastic letter box dropped and smashed to a million pieces (suspected due to unseen forces) coupled with a busy schedule at that time, EJ decided to put up a temporary letter box.

After finishing the last biscuit, EJ stared at the empty biscuit tin and thought, "Why not?"

EJ took out the hammer, a nail, a coil of wires and started work on the biscuit tin. Holes were made at the back of the tin for the wires to go through to tie the box to the gate. Holes were also made at the bottom to drain out whatever rain that may collect. EJ was extremely pleased with the result.

Visiting friends find this unusual letter box very amusing and would walk in with big grins on their faces.

With the biscuits finishing soon, EJ feels it is time to change the letter box as rust has filled the whole bottom of the existing one. 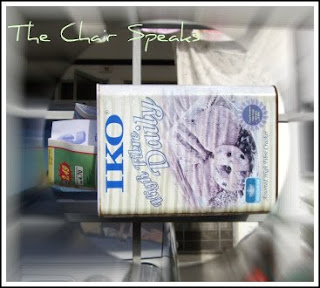 EJ was excited when a cute pirate hat complete with an eye patch was found online.

Captain Jack Sparrow HAWK needed the eye patch to cover his missing eye globe. The hat is just to give him the boost to make him feel macho.

Unfortunately what EJ found has the eye patch for the wrong side. It covers The Captain's good eye which he uses to view the world like a hawk.

So The Captain will have to just hold it in his paw. 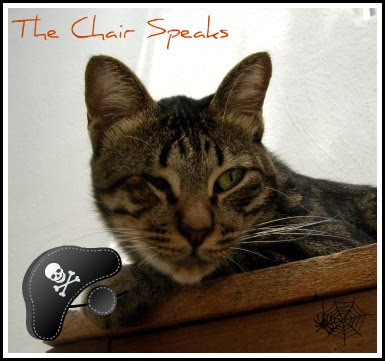 Though Halloween is not popularly celebrated in this country that has summer all year round, my roommates prefer to join in the fun by sleeping away.

EJ did not get anything Halloween for the cats as EJ feels the cats have too many toys given by relatives and friends including their vet.

The other reason why nothing was bought for Halloween was the fact that Winnie is a natural Halloween candidate. 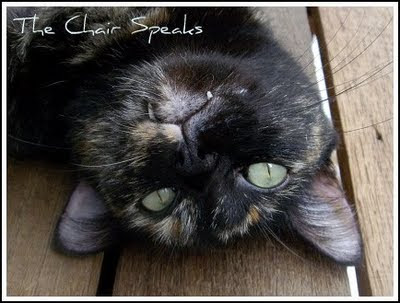 Winnie was not like this when she came a few years ago. As time went by, her fangs grew longer. Actually the canine teeth did not grow longer; it moved lower probably due to weakening and receding gums. So far this did not give her any problems.

The fangs made Winnie look like she has 'buckteeth' which makes her look rather cute. EJ had laughs whenever Winnie is scared as it is a comical sight - frightened eyes wide opened with supposedly fiercesome-looking fangs.
Posted by The Chair Speaks at 9:29 AM 11 comments:

Soon sounds of a hammer hitting wood were heard. If it was for chickens, then a chicken coop was being built. And indeed it was - built in the narrow back lane. 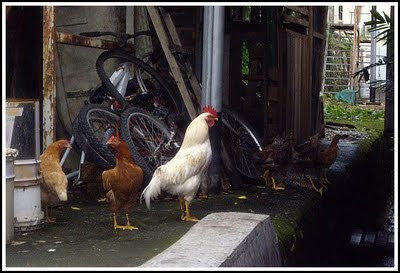 The chickens roamed the entire length of the back lane. The neighbours weren't happy about it.

One said that when her son was a few months' old, each time the cockerel crowed behind her house, her son would wake up crying. This particular cockerel did not seem to be able to differentiate time. It crowed even at midnight! This lady and her family have bought their own house and have moved.

Another family who lives directly behind this chicken coop seldom open their back door as the stench of chicken droppings is overpowering. They, too, have bought their own house and plan to move as soon as it is ready.

Though at times irritated, these neighbours may have had some giggles in observing visitors' facial response to cockerel crowings at night.


Like humans, animals have their own style of relaxing.

Some cats imitate one of the most relaxing style of humans - crossing legs.

Tommy does this often. Since he can't cross his hind limbs, the cat's equivalent of human legs, Tommy crosses his fore limbs. He looks really relaxed and macho when he does that. 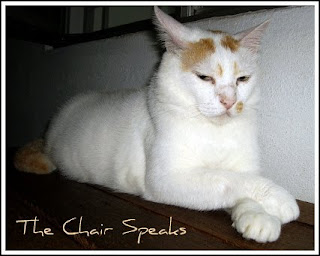 None of Tommy's roommates does this style of crossing limbs. Kenggy did.

It is absolutely unimaginable for Kenggy to cross her front limbs as she does not have her two front paws including both wrists. With her two front limbs considerably shorter than normal cats, the folding of her limbs were very tight.

And EJ was lucky to have taken photos of this act as Kenggy did it only once. 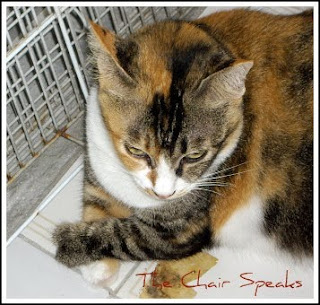 After the disappearance of the visiting cat during last year's Hari Raya Puasa celebration, this year's celebration would be peaceful. That was what EJ thought and how wrong EJ was. 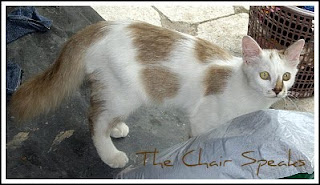 A few months ago, a neighbour got a frisky kitten and as usual it was given the complete freedom to roam. A quick chat with the neighbouring children, EJ found out that this kitten was given by one of their friends and its given name is 'Boy-Boy'. And of course, Boy-Boy did walk around EJ's porch and sleep in the shade among the flower pots.

Just like last year, this year the neighbours 'balik kampung' to celebrate. They stayed away for a week. And again the same thing happened. Boy-Boy was home alone.

EJ was slightly disheartened at such action and snooped around to see if any food was left out for Boy-Boy. None could be seen and even if any had been put out, for a week strays would have helped themselves to it.

Boy-Boy never asked EJ for food. Instead Boy-Boy hunted and hauled it to EJ's garden.
EJ had mixed feelings - annoyed at having to clean the mess and pleased as this indicated that to Boy-Boy, EJ's porch and garden is his sanctuary and haven where he could sleep and eat in peace without being harassed or disturbed by children. 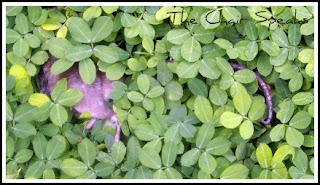 After righted the tent, EJ went into the house, prepared a mug of coffee and sat down for a much needed rest. Before EJ could finish that mug of coffee, EJ heard unusual sounds coming from the yard and went to investigate.

EJ was dumbstruck at the sight. The tent had travelled to the other side of the yard almost under the Chengal (tropical hardwood) podium. This time the culprit was Tanya. 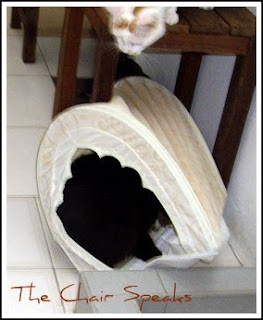 Inspite of other cats trying to coax Tanya out by pawing and trying to get in the tent, Tanya refused to budge.

This time EJ decided that the tent had to be saved. It wasn't easy. The cats gave EJ a hard time. The tent was folded up and kept. 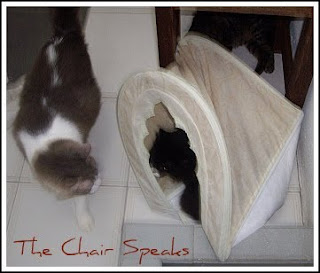 The cats did have a good time with Tommy inside looking out at Captain Jack Sparrow HAWK and Tanya feeling very comfortable cleaning herself inside the tent. 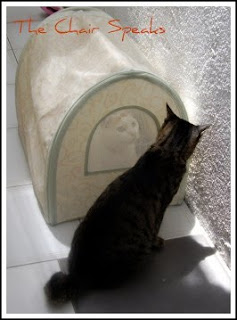 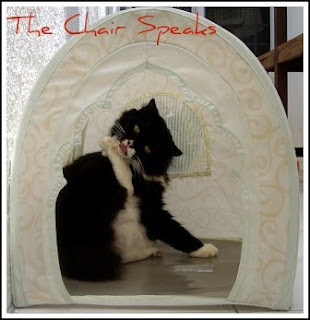 Since only two cats did not explore the tent, EJ ponders whether both Cinders (15-year-old) and Kenggy (without two front paws) should be given a chance in private.
Posted by The Chair Speaks at 9:43 PM 1 comment:

After wrestling the tent from Captain Jack Sparrow HAWK and smoothened it, EJ took a break. A short while later, the extreme quietness got EJ worried. EJ went to check and this was what happened. 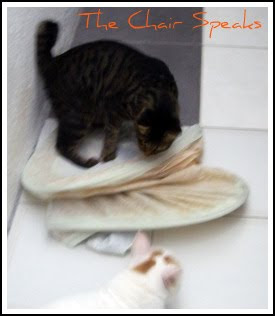 It was unbelievable that this tent could be flattened. Each time the tent sprang back to shape, Captain Jack Sparrow HAWK pounced on it and he seemed to enjoy doing it. 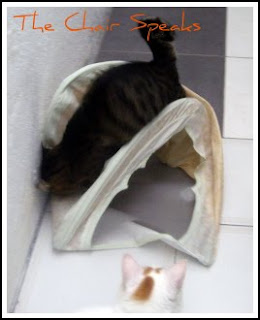 And when the tent finally fell on its side, our feline friend crawled and rested inside, looking obviously tired with a smug face. 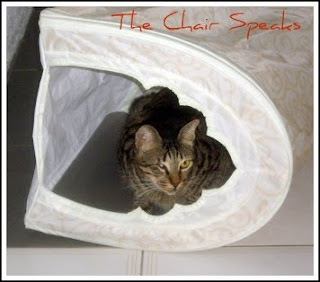 Even Pebble went inside the tent to explore, only after the Captain had sauntered out. 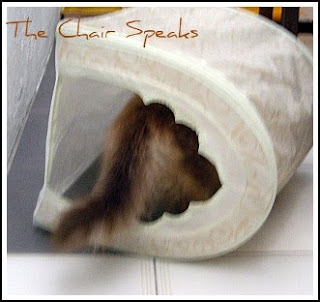