It was noticed that lately Kenggy has not been up on the Chair, table or shelf. Her waddling seems to be slower and hobbling more pronounced.

EJ decided to make a ramp to help Kenggy move to higher grounds. An old 1 foot by 6½ foot plank was used as it makes a gentler slope.

Initial plan was to drill a hole on both ends of the plank to secure the wrap-around hemp rope. But since EJ could not get hold of a drill, screws were used instead. 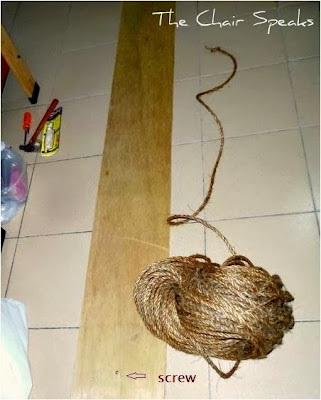 Rope wrapping took a long time. The plank was heavy. EJ had to use all four limps to repeatedly carry and turn the plank while keeping the rope as taut as possible. (Please don't mind EJ's foot on the plank.) While working, EJ kept telling Kenggy, 'This is for you, Kenggy'. Kenggy watched to the whole while; other kitties came, looked and left. 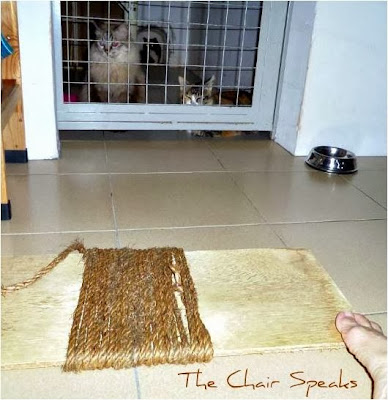 The completed hemp-ramp was placed in the MeowRoom with one end on the floor against the corner while the other end rested on the upper shelf on the opposite side; midway of the ramp is the same height as the Chair and table. 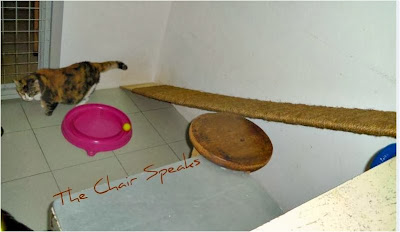 EJ wanted Kenggy to be the first to use the ramp and placed Kenggy at the bottom. Nosy Captain Jack wanted to use it too. 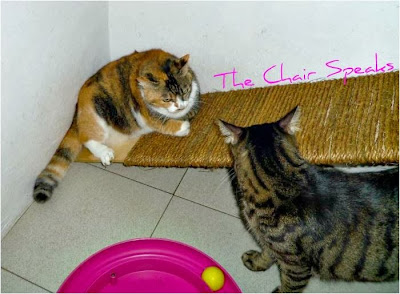 Very soon, all the kitties came, tested and used it as a giant scratch post. 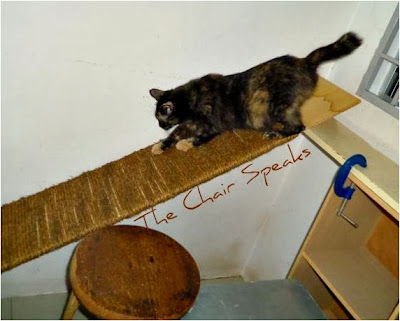 The ramp warped when fat Tanya walked on it. 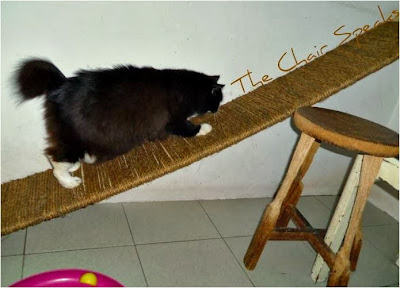 Pebble stopped by the Chair and table midway. 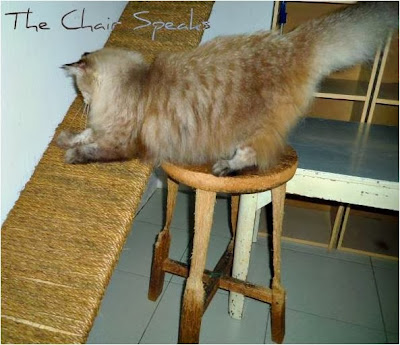 Both Captain Jack and Tanya liked it enough to nap on the ramp. The creaking noise of the MeowRoom door woke them up before these pictures could be taken. 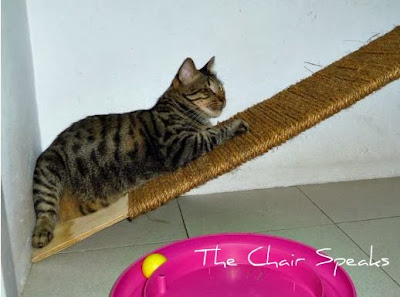 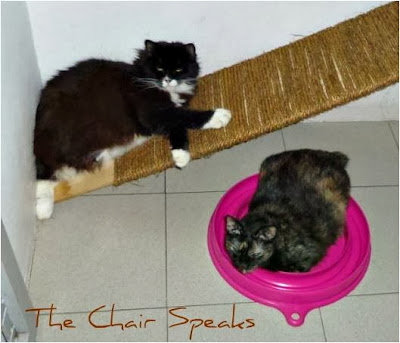 From the bottom of her little heart, Kenggy thank Crumpet, Maneki and their human for donating 2 giant rolls of hemp rope for without it, this hemp-ramp would not be possible.

We wish all a     HAPPY NEW YEAR
full of     Success, Courage and Prosperity.

PS: Numerous lumps could now be felt on Kenggy's chest.
Posted by The Chair Speaks at 2:34 PM 20 comments:

a Joyous Holiday filled with Peace,
Love, and Prosperity 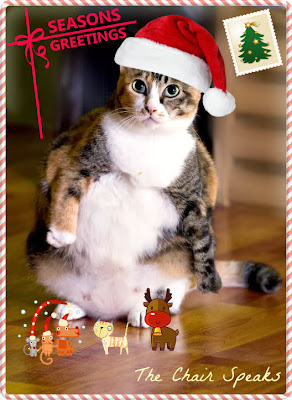 Our human got us a new litter tray which is slightly taller, broader and longer than the ones we have. It is to replace the old worn out tray.

We suspected the main reason was that our human was tired of cleaning our 'toilet accidents'!

After the new tray was cleaned with soapy water and put in place, Tanya immediately checked to see if it makes a more comfortable snoozing bed than using it as toilet.

This is Tanya's opinion! 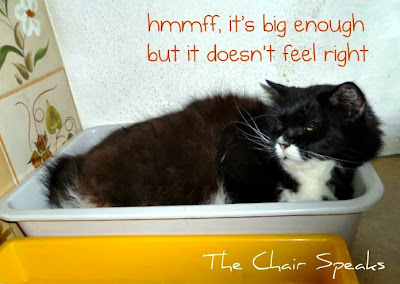 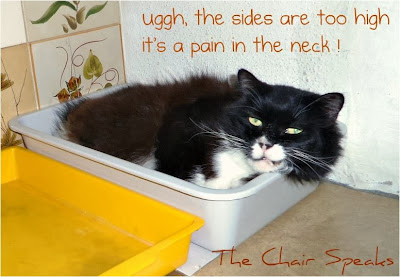 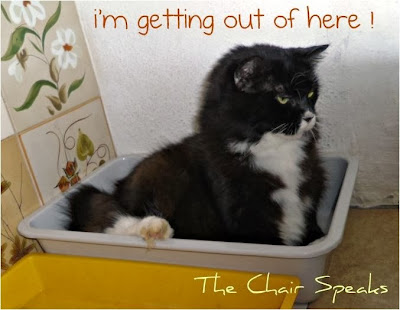 Snapping photos of cats can be a daunting task at times.

Before EJ could sit comfortably on the floor to try to snap a photo of any cat in the MeowYard, inquisitive Kenggy waddled near. 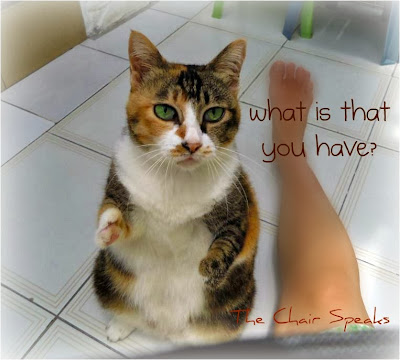 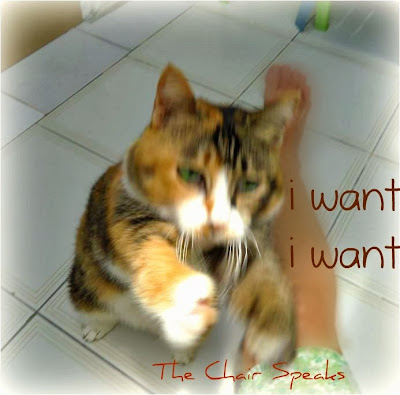 Standing upright using both her stumps, Kenggy caught the strap unceremoniously and stuff it in her mouth. 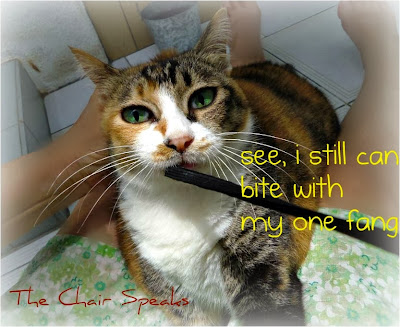 You may ask why was EJ slow in preventing it? Well, EJ was off-balanced though seated and Kenggy placed both her stumps on EJ. Her stumps are just skin covering bones. It hurt and EJ dared not move for fear that Kenggy may fall.

Slowly, very slowly the strap was removed. Tanya came to check out what the commotion was about. That marked the end of photo session for the day.
EJ was tired out. 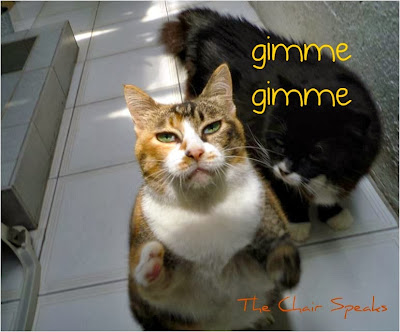