When EJ's mother was a young lady, plastics did not exist. Whatever food and things that were exported and imported were not transported by aeroplane then but by ship. To safeguard its contents, foodstuffs and things were packed in wooden boxes.

To make good use of these two boxes, it became EJ's and siblings' 'wardrobe'. Those days, clothes were usually folded and not hung on clothes hangers.

It was also not known or remembered how EJ inherited these two 'wardrobe' boxes which by now would be termed and viewed as 'junk'. Since it held such happy childhood memories, EJ decided to convert it to something useful - a coffee table!

The box with the lid would be on top. 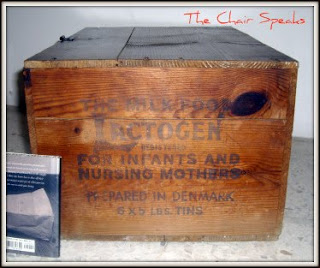 The box without lid would at the bottom. Castors were screwed at each corner at the bottom of the box so that it could be easily move about. 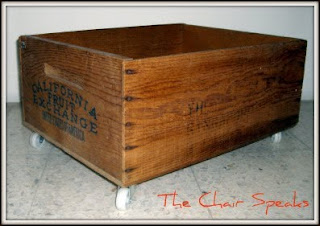 Two fastener clips were purchased and one on each side was screwed on. The clips can be unfastened to gain access to things stored in the bottom box. When the clips are fastened, the top box will not slide off or move from the bottom box. 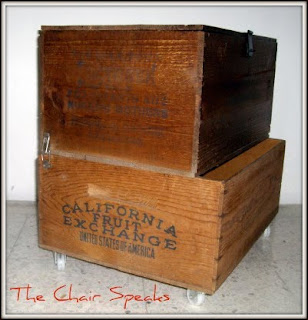 A thorough wood polish completed it.

Well, the two boxes did not exactly fit but the difference in size created a useful gap for easy retrieval for magazines and other reading materials.

At times, it is also a laptop table.

To EJ, this useful 'junk' is a beautiful conversation piece. 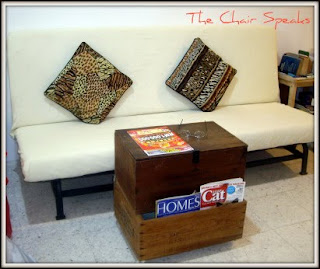 Friends of Pebble and Winnie

EJ managed to locate these old pictures when Pebble and Winnie were still together with these abandoned cats.

This was a big male cat and possibly a Maine Coon mix. He was one of the healthiest looking in the group. It was a beautiful cat. 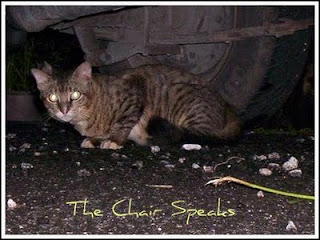 Another beautiful, healthy looking cat whom EJ believed to be a female as it was always on the alert. 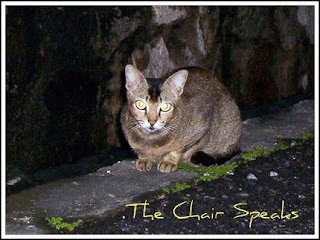 Kibbles left on the parapet for the cats to eat was definitely cleaner than on the road. 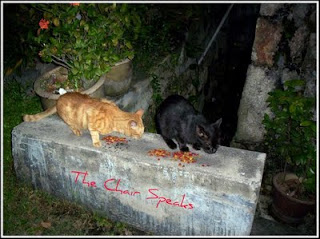 Another cat who was too scared to come near, waited in the middle of the road for EJ to go off before eating the kibbles. 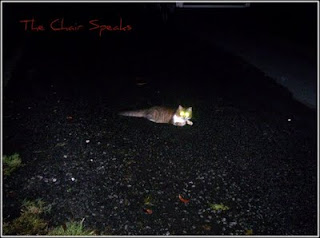 This extremely thin white cat possibly a female was a DLH (domestic long hair) waiting to eat as well. EJ was sure that if properly cared for, this cat would turn out to be a beauty. Its fur was sparse possibly due to malnutrition as well as parasites. 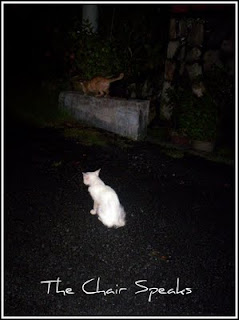 Having no home, wherever, whatever and however small or uncomfortable the shelter may be, it was fine with these abandoned cats. 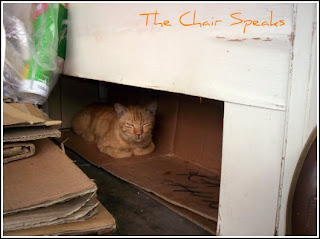 EJ regrets that all these abandonees could not be taken in. Only Pebble and Winnie were taken in as these two were the worst off and needed immediate help the most.

EJ hopes that all the abandonees are now in a 'better, happier place'.
Posted by The Chair Speaks at 9:49 AM 4 comments:

Being a vegetarian has its benefits. The immediate benefit that comes to mind is that your cholesterol level will not go up unlike those who eat meat.
EJ is amused and at the same time baffled when friends who love eating meat compliment this vegetarian dish - Tom Yam Fried Beehoon.
This dish is easy to cook, whether it is for two or five persons.

Method
1. Pour oil in the wok.
2. Put in sliced tauhu, onion and garlic. Stir constantly to prevent it from being burnt. 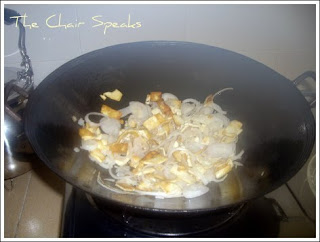 3. Put in cabbage, carrot and French beans. Add salt to taste. Cover the wok and let it cook for a short while. 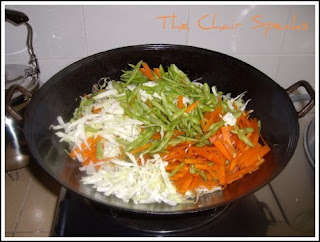 4. Stir to allow all vegetables to be evenly cooked.
5. Add in pre-soaked beehoon and a small amount of water.
6. Add 2 tablespoons of Tom Yam paste and mix well.
7. Cover the wok to let it cook.
8. When all the water have been absorbed by the beehoon, it is ready to be served. 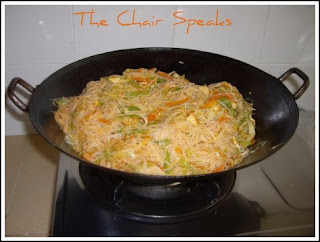 Tom Yam paste are readily available and sold in jars.
If you like your beehoon to be more spicy, just add another spoonful of Tom Yam paste. 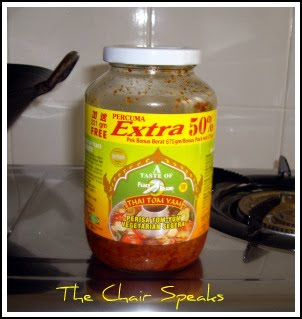 Happy cooking!
Posted by The Chair Speaks at 1:39 PM 10 comments:

Not many cats have the honour of a healthy long life.

Cinders turned a grande dame at 15 human years last Thursday and did not mind one bit when EJ clean forgot her birthday.

She just went about doing what she does everyday - resting and observing her roommates.

This little chair is her favourite spot. 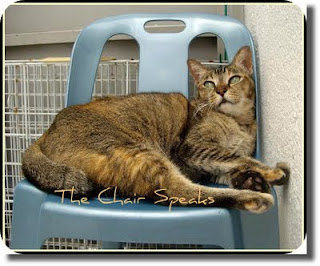 She still look cute from a certain angle. 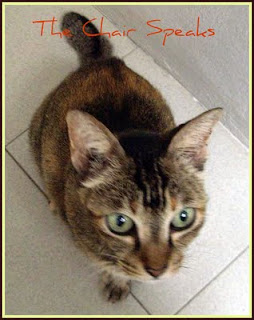 This is her favourite pastime and hobby. 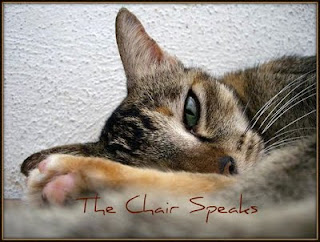 May Cinders enjoy doing this for many years to come.

Stray and hungry cats know where to go in Sri Petaling. Perhaps it is the cats' powerful sixth sense together with meow whispers that the cats make their way to a certain shop that sells pet food and paraphernalia - Home Pet Food & Care - owned by Jimmy Lee and his lovely wife Angela.

Being animal lovers and warm-hearted, they pick up strays, nurse and fatten them before rehoming.

One day, a brown mackerel tabby appeared and sat outside the glass door of that shop. On closer look, this cat has only one eye and was promptly taken in.

'One-Eye' was then named Jack Sparrow HAWK after the hero of the film Pirates of the Caribbean. He was cleaned, bathed and soon filled out under both Jimmy's and Angela's care.

However hard they tried, no one seemed interested in adopting 'One-Eye'. Jimmy's friend, Charlene, also a warm-hearted animal lover came to know of this, decided to help. She contacted her 'recently found' ex-colleague EJ about adopting this cat. 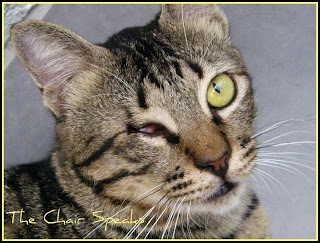 EJ preferred to allow Jack Sparrow decide whether he wanted to follow EJ home just like Kenggy did.

During the eyeballing session, Jack Sparrow stared with such sadness that made Charlene cry and EJ promptly phoned the vet to make an appointment.

To compensate what was removed from the rear, his vet bestowed him the Captainship and was thus officially named Captain Jack Sparrow HAWK.

And on Christmas Day 2007, Captain Jack Sparrow HAWK became part of the gang - the gang of 8.

PS: So passionate is Jimmy about cats that he breeds the one of the largest known domestic cats - Maine Coon. The constant wins of his cats at international competitions are proofs of his absolute devotion.