Captain Jack Sparrow HAWK yowled. Our human ran to the MeowYard and saw Jack squatting in his litter-free litter box trying to urinate but only a drop came out. His urethra was blocked.

Our human contacted Jack's vet but unfortunately the clinic was closed that day. His vet is such a nice man and said that he will open his clinic just for Jack if we could make it there by a certain time.

Under anesthesia, a catheter was inserted in his urethra and urine flushed out from his turgid bladder. 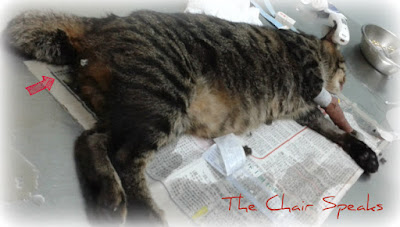 On waking, an angry Jack ripped off the IV drip and tore off his e-collar. Quickly he was back on the surgery table, re-anesthesised and IV catheter secured with more tape and bandage.

This time, on waking, Jack was ferocious, hissed and fought so hard that the e-collar was destroyed and the reinforced IV ripped out. (Later we found out that he bit his forelimb to tear out the IV bandage, one claw was ripped out in the process and was bleeding in his tongue.)

Jack, a former feral, could not be hospitalised and had to be taken home. And back again he went on the surgery table to be anesthesised to remove IV and catheter in his urethra.

Our human is grateful and thankful to Jack's vet for being so nice, patient and understanding. The good doctor helped carry Jack to the car in the pouring rain. Both doctor and our human were drenched.
Posted by The Chair Speaks at 10:29 PM 16 comments:

We, kitties, have been lazing a lot lately; even more so with daily heavy rain and thunderstorms these few weeks.

Greatly influenced by us, our human followed suit, lazed a lot and procrastinated to the point of not even blogging or checking mail.

Well, our human suddenly realised that it is now November and had missed several kitty events like Halloween, etc. 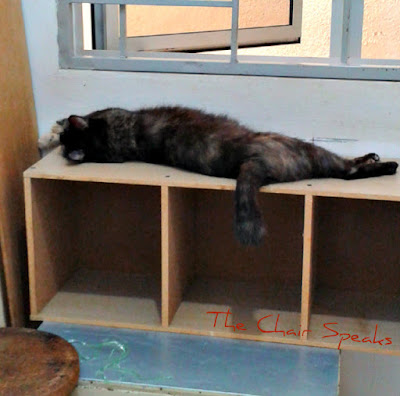