This morning our human went for a hike in the nearby forest reserve.

Approaching the car park, there was an empty parking spot with a black kitten lurking nearby.

That black kitten was hungry.

It then dawned on our human that yesterday, Saturday, was the 'Hungry Ghost Festival'.

On the fifteenth day the realms of Heaven and Hell and the realm of the living
are open and both Taoists and Buddhists would perform rituals to transmute
and absolve the sufferings of the deceased."

Well, that black kitten had a full belly and no, it did not lap up those beers! 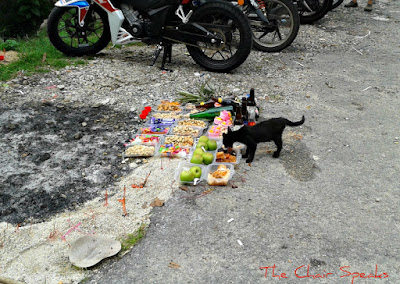 A few days ago, our human was tickled by Winnie.

Walking past the MeowRoom door, our human saw from the corner of the eye Winnie sticking her head out staring at our human.
Stealthily walking backwards, our human quickly grabbed the cellphone and started snapping Winnie's pictures.

It was not easy as the cellphone kept shaking from our human trying to keep a straight face not to laugh out loud lest the 'cat face walks out leaving its mutant teenage turtle shell behind'. 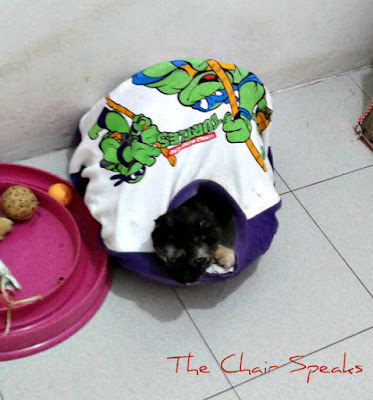 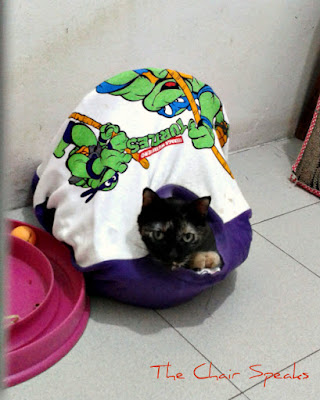 PS: Our human will start blogging about untold stories of Winnie's previous roommates as well as our human encounters of kitty friends.
Posted by The Chair Speaks at 3:12 PM 10 comments:

A Drooling Cat is a Happy Cat

Can you see those drools? 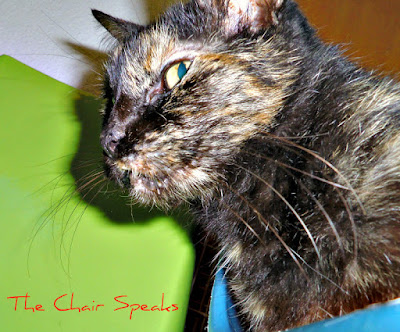 Intrigued by the cartoon Teenage Ninja Turtle, our human's sister-in-law bought two sets of T-shirts and sweat pants at a night market for her 6-year-old daughter (our human's niece); the other set for our human. The label says '10-11 year old'. Well, both niece and aunt could fit in that set! That happened almost 30 years ago.

Niece has long outgrown her set. Our human still wears that comfortable faded purple cotton sweat pants but not the top and decided that Winnie should wear it. 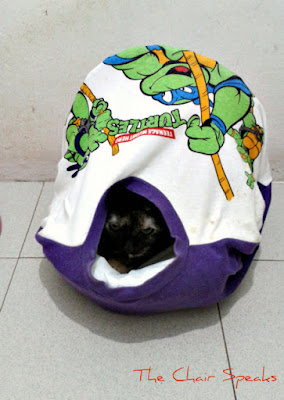 Winnie would look like a turtle if she stuck her head out more.
Posted by The Chair Speaks at 2:39 PM 12 comments: