Saturday morning started like any usual normal day with EJ feeding the cats and then cleaning their toilets. There were blood on the toilet trays.

EJ knew the culprit to be Pebble as she was seen straining a few times the day before. Few days before that, Pebble was quieter than usual, sleeping a lot curled up in a corner alone.

Quickly an appointment was made with the vet that afternoon. Pebble mewed non-stop throughout the journey. The extended weekend due to two festival public holidays resulted in heavy traffic and jam.

Pebble was a good girl and allowed her doctor to manipulate her in whichever way needed which was good as her doctor could check her thoroughly.

An x-ray was taken. There were two shaded spots in her bladder. And since it could not be ascertain what it is, an ultrasound was done.

Pebble's belly was shaved. The ultrasound showed an irregular shaped bladder but then Pebble had emptied her bladder during the drive, so nothing is conclusive.

For now, she is on medication for FLUTD and will be checked again after two weeks. 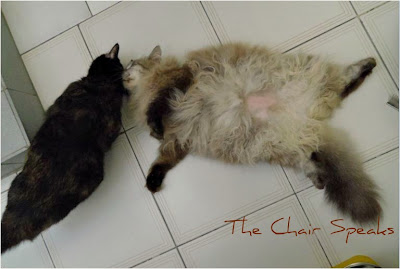 PS: Our human wanted to post the x-ray but found that what was brought home was an empty envelope. The x-ray was left behind at the vet!
Posted by The Chair Speaks at 9:12 PM 26 comments:

First Meet of the Year

The cats are holding the first meet of the year, an emergency meeting, as to find out why the human did not post any news.

EJ explained that the time was used to desperately search for Kenggy's first few photos since her Gotcha Day was on January 10. 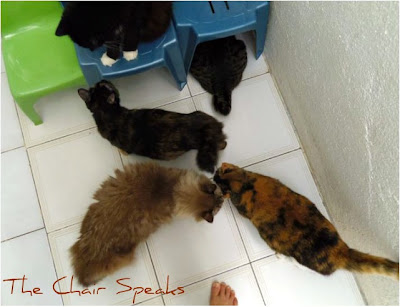 Gotcha Day is the day of joining the gang after complete check-up and spaying is done.

Some of Kenggy's old photos were found but not all. The search continues.

Tanya, being the eldest at 15 acted as 'chair-cat', replied on behalf of the gang to EJ's excuse. 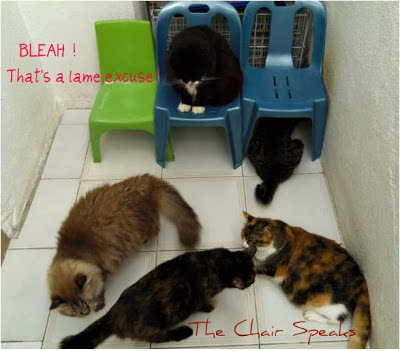