It's Hard to Say GoodBye!

Kenggy became weaker but she managed to maneuvre herself to face the MeowRoom door. Our human placed a rolled-up cloth to support her head to ease her shallow breathing.
Her best friend, Winnie, came to keep her company, both staring at each in a silent communication.
Soon after Kenggy passed away on 10th June 2014. She was cremated. 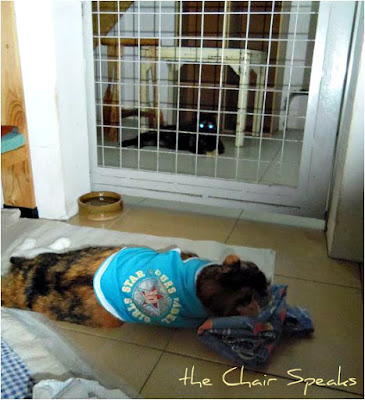 Before our human could finish clearing the special 'Meow Suite', Pebble got seriously ill. Pebble's sickness was a constant yo-yo.

To replenish her medication, our human made an appointment with Pebble's doctor to pick it up the next day. Early next morning, on 25th January 2016, Pebble was found in a rigor mortis mode and a phone call was quickly made to her vet to cancel her medication.

Here Tanya, Winnie and Captain Jack Sparrow HAWK were telling EJ that they have finished saying their last goodbye. Just like the rest before her, Pebble was cremated. 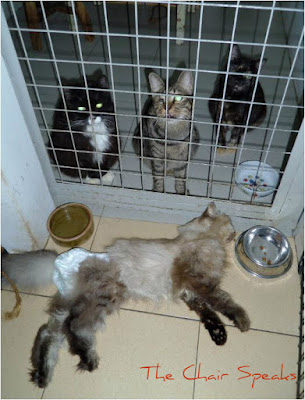 It was when her ash came home that it hit EJ that both, Kenggy's and Pebble's, absence was really felt.

Yes, that 'Meow Suite' was dismantled and cleaned but EJ somehow could not clear many of their things. Perhaps our human need a little more time to heal emotionally.
Posted by The Chair Speaks at 2:41 PM 20 comments: