Presented this Stylish Blogger Award by Mr Puddy, my roommates' good buddy, made me want to jump for joy. Thank you. 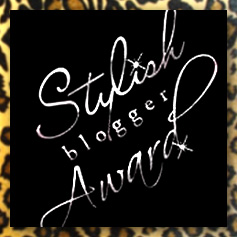 There are simple missions attached on receiving this award. They are:
1. Thank and link back to the person who awarded you this award
2. Share 7 things about yourself that the people out in Blog Land might not know
3. Award 7 recently discovered great bloggers
4. Contact these bloggers and tell them about the award
Now seven things about me.
1. Having survived four human generations, I'm not sure whether I could survive to the fifth
2. Never alone, I always have company and treated well as I have never been thrown about
3. When first acquired, I was of a different colour which was rather pale; now I am beautifully tanned through the aging process
4. Much loved by human and animals, being patted and pawed (lovingly mauled as well) by them, I am really richly polished
5. Though all my legs are getting slimmer, they are still strong to support a human weight. EJ still stands on me
6. I do have a close friend who is older than me - that table beside me is more than 50 years' old which was EJ and siblings' study table when young
7. Beautiful girls like Pebble and Kenggy love to hang out with me because I make them look good! :) 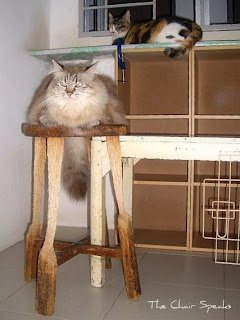 Walking On the Wall

Moving like a normal cat must be hard for Kenggy. She walks slowly and carefully on the ground.
Perhaps like humans, Kenggy possibly may have dreams. Dreams of wishing to walk less cumbersome and less painful.
Walking on the wall could be it! With zero force of gravity and no stress on joints, there is no pain.
EJ was lucky to have captured these never seen in public before pictures of Kenggy's walk. 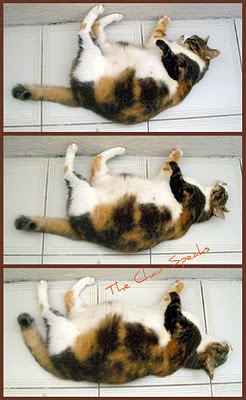 Kenggy even had time to clean her belly... 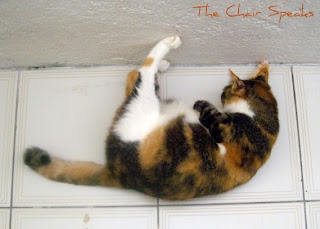 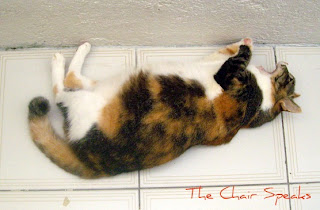 
They are united even in sleep. 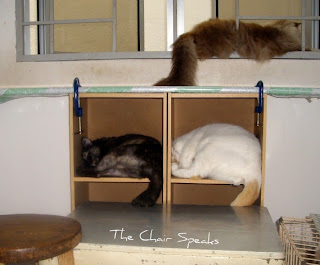 When in elementary/primary school, EJ had a tiny diary. It had little sayings in it. One which EJ still remembers vividly is 'Unity is strength and so is onion'.
Pet Pride
Posted by The Chair Speaks at 10:19 AM 21 comments:

The sun was bright and hot today.
A little after noon, EJ heard a horn that sounded like the quacking of a duck at the gate. It was the young affable postman alerting EJ. He had a big grin on his face and a box in his hands. The box was sent from Australia.
It was from Mr Puddy.
EJ opened the box immediately. All the cats were fast asleep but the rustling sound of opening the box and checking its contents woke Cinders. Like human senior citizens, Cinders, the feline version is a light sleeper.
She was the only one who came to check it out... 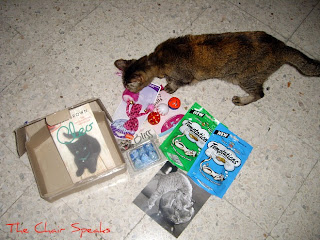 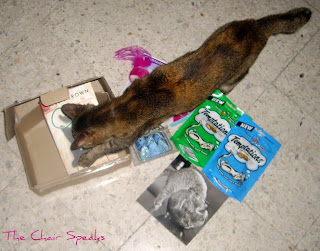 ...and pawed this lovely card of sweet feline love in a glass with a note inside handwritten with much care. 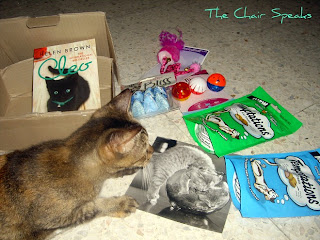 All the cats were still asleep when Cinders finished her tour of gifts and EJ put them back in the box.
Thanks very much Mr Puddy.
We love you, buddy!

It's Sunday!
Tanya has many sleeping positions, mostly funny, some ridiculous and occasionally dangerous like this. 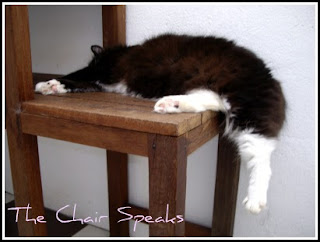 Once, few years ago, she slept dangerously and fell off EJ's bed. EJ managed to snap a few shots then and will try to locate them.
Pet Pride
Posted by The Chair Speaks at 8:40 PM 27 comments:

Last Christmas, EJ and elder brother went to the graveyard. It was cool and misty that early morning. EJ was surprised to see many people there cleaning graves of their loved ones and placing flowers.
After cleaning their father's grave, flowers were arranged in a plastic container. 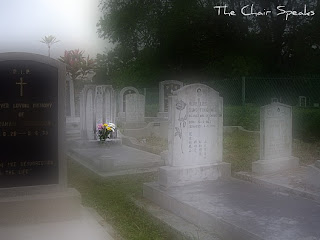 Being at this graveyard brought back frightened memories of what happened more than 30 years ago.
**************
Travel time boarding two buses from work to home takes at least two hours. EJ had to reach home as quickly as possible that day and decided to hail a taxi.
Just a few kilometres from reaching home, the taxi driver turned off the main road and went into a narrow road. Soon it led to many trees on both sides.
Taxi driver: 'I think I made a wrong turn.'
More than 30 years ago, EJ was youthful and attractive. There were many cases then of passengers being robbed, assaulted and even killed.
EJ hid the nervousness by trying to appear cool and replied nonchalantly.
'Don't worry! I know this area very well and know where it leads to.'
As soon as EJ finished that sentence, graveyards were seen on both sides.
It was dusk and getting dark pretty quickly.
There were many rumours and stories about the young and good-looking usually females getting or asking for help and then at the most critical moment morphed into some horrible inhuman creatures.
Seated upright and tensed, the driver kept looking at the rear mirror fearing that EJ might morphed into something.
EJ too stared straight into the rear mirror without blinking and gave one word instructions.
'Right'
'Left'
'Left'
On seeing dad's grave, EJ felt reassured and became even more calm.
The driver never uttered a word.
As the taxi turned back to the main road, the driver gave a barely audible sigh. His body and shoulders relaxed visibly.
He must have prayed very hard while driving through 'twilight' and thankful that EJ did not morph in front of him.
Posted by The Chair Speaks at 11:44 PM 19 comments:

EJ is a tad busy and stressed.
Captain Jack Sparrow HAWK would gladly give EJ a tip or two on how to handle such situation, emotion included.
When he first came home, EJ confined him in this cage to give soft introduction to the gang. He was safe as all members of the gang paced round and sniffed him out.
Here, see how he took it all in his swanky stride, rest his tired head on the food/water dish with a big satisfying yawn in such a sexy relaxing way. 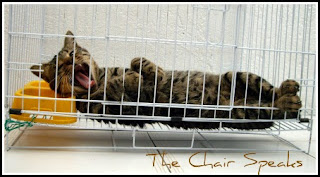 Now if only we understand his meowrrrrrs....

It's Sunday!
Whenever EJ sits in the meowyard to spend quality time with the cats, Captain Jack Sparrow HAWK is usually one of the first to sit on EJ's lap. If other cats got to EJ first, he will wriggle and push for a spot.
He doesn't sit still; he starts play fighting like this. 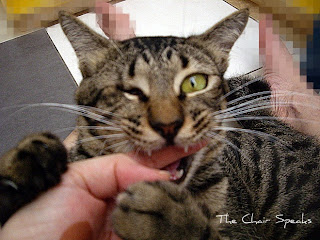 Ouch! Ouch!
Soon others will join in and pounce on EJ from all sides. More ouch, ouch!
And when the situation gets too much to bear, EJ has to get up and leave.
Pet Pride
Posted by The Chair Speaks at 9:43 AM 22 comments:

Living on opposite sides of the globe, EJ and brother experience life differently.
Weather is different too. EJ copes with the tropical heat with once a year rainy monsoon while brother braves the four seasons.
EJ feels year end is worse for both as it is the monsoon season with torrential rain for EJ and heavy snowfall for brother.
There is an air of festivity to brother's house with the front beautifully decorated with Christmas and New Year lights. The road on the foreground is completely covered with snow. 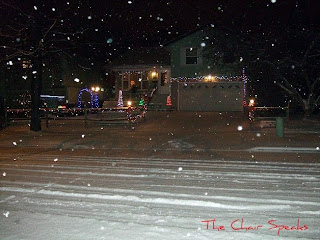 Backyard is lighted up too. It is too cold even for desperate squirrels to visit. 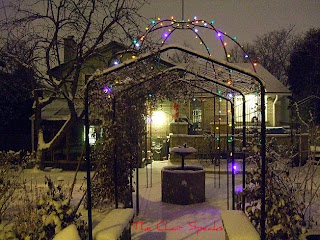 In contrast, the only air of festivity in EJ's house is the tinsel-wrapped one leg of the dining table! To see the picture, please click here.
This is the cats' eye view of EJ's postage stamp sized garden after heavy rain... 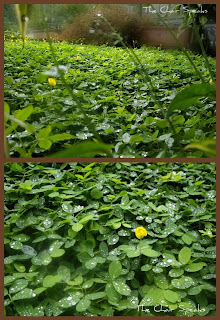 ...and the covered tiny backyard where the cats lounge even when it rains. 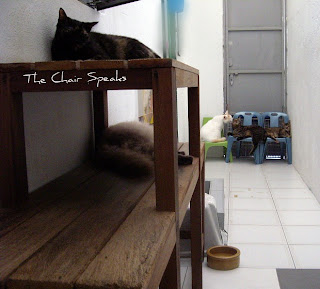 Start the Year with Good Health

It's Sunday!
On behalf of her buddies, Kenggy wishes all a Happy and Healthy New Year!
Exercise and live healthy! 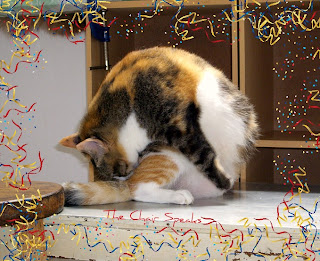 Pet Pride
Posted by The Chair Speaks at 9:43 AM 37 comments: