The sweet, clear voice sang about a friend who lived in the sewer beneath the streets. The name of that song is Ben. Ben is the name of a sewer rat. The singer - Michael Jackson (MJ). He sang this song when he was a child. And EJ loves this song, this voice.

Two days ago, EJ decided to make an exception to go watch a particular movie after hearing rave reports about it. Even without the rave reports, EJ would watch it though EJ could not really remember which was the last movie seen, whether Lord of the Rings or the prequel to Star Wars.

Lazy to drive, EJ thumped a lift to town.

This time EJ did not get lost trying to locate the cinema like the earlier days. That time EJ could not understand why EJ kept ending up at the bowling alley and had to ask for directions from the counter girls. Even the girls found it amusing and laughed.

This time the girl selling tickets at the cinema was helpful. EJ even got the special senior citizen discount after producing the identification card as proof. 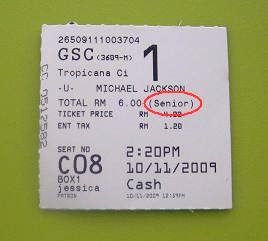 The movie was on the preparation of MJ's last concert, the sweat, the tears, the pain. Songs that EJ likes were sung in the rehearsals like Ben, Man in the Mirror, Heal the World and more. Somewhere further down the rows of chairs, someone, a male, was singing along obviously enjoying himself tremendously.

The cinema hall was a bit on the chilly side as there were not many people watching since it was during day time.

When the movie show was over, EJ noticed that majority of those who walked out were gray-haired!

EJ's view on this? 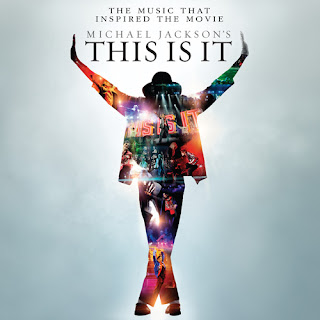 Posted by The Chair Speaks at 2:29 PM

Hmmm.....maybe I should get the DVD so my mum can watch it, too. She loves MJ but does not like going to the cinema these days...she finds the sound system too loud.

i hvn't watched it yet..

I find the sound system too loud too. D:

My mom wants to go watch! But I want to go see the end of the world. o_O

Thava, we will "Oowww" together when I visit you in office. Okay? :)

Blackie007: At a certain point, I almost sang along too but had to refrain myself. There were people sitting beside and behind me but none for a few rows in front.

I, too, can't stand loud sound system. Cinemas at Mid-Valley are too loud. The one I went to was at Tropicana. Sound system was not that loud.

Wenn: I think you should try to watch it.

should get the DVD so my mum can watch it,