It hits you hard when there is a sudden power failure without warning. And you do not know when it will come back.

EJ remembers during younger days while working, all the writers would scream in frustration when this happened. The loudest screams were from those who had a deadline to beat and had not saved their work. Obviously in the writing mood with words flowing, they kept pounding the keyboards chasing their thoughts and did not really have time to save. Some writers do write best when nearing deadlines.

It isn't so bad if this happens at home.
EJ took advantage of the power failure to clean the refrigerator and all electrical fans.

To cool the house in the tropical afternoon heat, EJ mopped the whole house. It was a good exercise to burn off any excess fat as well as strengthen the muscles. Toxins were removed from the body in the form of sweat as well.

To cool the body, just take a cold shower.

Working hard physically can really work up an appetite.

Food? Not a problem.

EJ, a vegetarian, opened a can of baked beans and cooked it with the naturally thawed frozen mixed vegetables. Vegetables are perishable and without the refrigerator, it has to be consumed. 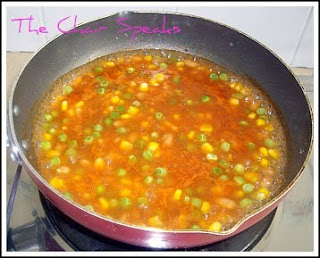 This dish goes well with rice or bread. When these two were not available, EJ has tried eating it with cream crackers.
Non-vegetarians can throw in whatever meat as well. 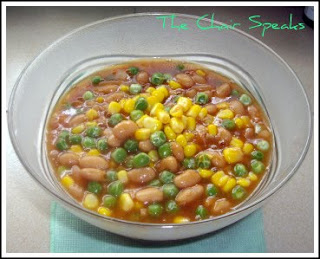 EJ doesn't think so. You make the best out of it till the power comes back. Another plus is that your electricity bill will be a little lower.
Posted by The Chair Speaks at 12:23 PM

don't mind if it's in the day time..night time would be terrible without the power supply..

Awh it would be really horrid if you were writing and you were on a really good roll and then suddenly there was a power failure. D:

Which reminds me... I should be writing Chapter 9 now! D:

My mom's a vegetarian (but not a vegan so she eats eggs and milk and stuff). She can do really nice stuff with food as well. :D :D

The Word Verification under your comment box has given me a really good name for a character!!

I've got a UPS and for the rest, well that's just part of living in Asia.

Thank you Wenn for dropping by. Do agree that it would be more difficult if happened at night.

Oh, really Tigertail, your mom's a vegetarian, too! Now you got me wondering what's that 'verification word'.

Thanks Katztales for visiting. Think I should get a UPS too.