Mom made Music on Erhu

A woeful screechy wail pierced through the quiet night.
EJ and brothers stared at each other. Without a spoken word, they immediately left the dining hall, went into their bedroom and closed the door.
Mom was practising on her erhu.
The erhu consists of a long vertical stick-like neck, at the top of which are two large tuning pegs, and at the bottom is a small resonator body (sound box) which is covered with python skin on the front (playing) end. Two strings are attached from the pegs to the base, and a small loop of string (qian jin) placed around the neck and strings acting as a nut pulls the strings towards the skin, holding a small wooden bridge in place.
Various dense and heavy hardwoods are used in making the erhu. According to Chinese references the woods include zi tan (red sandalwood and other woods of the genus Pterocarpus such as padauk), lao hong mu (aged red wood), wu mu (black wood), and hong mu (red wood). Particularly fine erhus are often made from pieces of old furniture. A typical erhu measures 81 cm from top to bottom, the length of the bow also being 81 cm.
source from wikipedia.org
Mom played on two erhu-s. EJ's brother bought this beautiful erhu with dragon head and snakeskin soundbox from a friend. And when mom's erhu teacher commented that this erhu's tone was too high to match the rest of the erhu-s in her group, mom bought her own - a plain one. 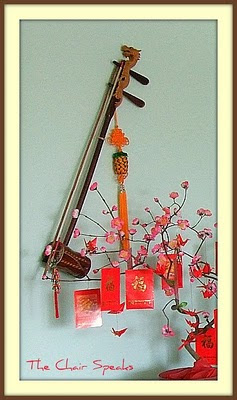 This dragon head snakeskin erhu is now displayed in the owner's house in Toronto. The owner, EJ's brother, does not know how to play but who knows he may one day decide to learn.
Erhu makes versatile and beautiful music. Name of the music played on this video clip is The Horse Race.

Of course mom could not and did not play like this man but EJ is pretty sure that this next clip was one of the many songs mom learnt and played.
Many, many moons later, one night when EJ and brothers were at the dining hall, they heard soft, soothing music. All looked up and at each other, eyes wide opened with jaws slightly dropped in realising who made that music. Dropped jaws slowly turned into a knowing smiles and they continued doing what they were doing. No more scurrying off to their rooms to stay behind closed doors.
This was more than 25 years ago. Now mom, an octogenarian and approaching 90, does not play anymore. Her erhu is somewhere in her bedroom where no one touches it.
EJ would like to wish all mothers (human and animal) Happy Mother's Day and hope that these lovely music will bring back happy memories.
Posted by The Chair Speaks at 11:34 AM

DIGITAL WORLD PAGES ARCHIVE said...
This comment has been removed by the author.
Thursday, 06 May, 2010

Hello!
Interesting!
Excuse me ,I did mistake.

My late grandpa had a collection of erhu, and other classical musical instruments, and I used to enjoy listening to him. He played until he died at age 70, 14 years ago. These pieces remind me of him.

So that's what those instruments are...erhu. I've heard them and wondered.

Well done for your Mom learning to play one.

A lovely tribute to your sweet Mom; Happy Mother's Day to her too...xo...Calle, Halle, Sukki

That looks like a very difficult instrument to master. Kudos to your mom for doing so! And a very happy Mother's Day (early) to everyone!

That's so sweet. And thanks for wishing us cat Moms Happy Mother's day. My kitties are my only kiddies.

This is such a sweet memory. Thanks for sharing it. Very interesting about the erhu. I've never heard of it. I hope your mom has a wonderful Mother's Day!

That looks very hard. I have neer heard of that before. A lovely tribute you did.. Hugs GJ xx

wow many interesting information about "erhu", we knew nothing about it, thanks so much for introducing it for us!
Happy Mother's Day and a beautiful weekend!
purrs and love
Luna - We love Luna

I had never heard of a erhu before, so this was very interesting.

We wish you a Happy Mother's Day and a wonderful weekend

Through blogging I really learn a lot ! I don't think I have ever seen this instrument. The music sounds lovely.

Through blogging I really learn a lot ! I don't think I have ever seen this instrument. The music sounds lovely ! I am sure that I have heard it already but didn't know from which instrument this special sound was coming from !

That's a nice post about your mom. Happy Mother's Day!