He Ain't Heavy, He's My Brother!

Written by Bobby Scott and Bob Russell, this is a popular music ballad was recorded by The Hollies in the late Sixties. Part of the lyrics...
...If I'm laden at all
I'm laden with sadness
That everyone's heart
Isn't filled with the gladness
Of love for one another
It's a long, long road
From which there is no return
While we're on the way to there
Why not share
And the load
Doesn't weigh me down at all
He ain't heavy, he's my brother
He's my brother
He ain't heavy, he's my brother...
It is exactly what Winnie's eyes say when Tommy, who is sizes bigger and heavier, lay his big heavy head on her in EJ's household where all differ in size, age, colour, mood and character. 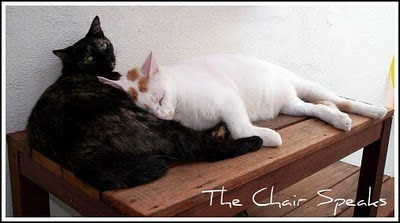 Thank you for a comment. The phrase"He ain't heavy. He's my brother" sounds familiar to me. When I was small, I went to a concert of a choir from the Boys Town in the US. I think that was the first time I heard this phrase. Thanks for reconnecting me to my old memory. It's a nice phrase.

A precious photo; Winnie and Tommy are beautiful babies and they look adorable cuddling together....Hope you all have a happy week friends...xo...Calle, Halle, Sukki

Happy Tuesday!
Such a sweet pose, look at Winnie with her eyes, as though she is saying "Shhh... Tommy's asleep.."

so sweeeeeet!! *hugs to tommy and winnie*

Awwwww what a beautiful lovely pic!! Winnie you are a cutie and a good sister to your gorgeous brother Tommy! He looks very happy and comfortable. Me and Charlie are sending you and Tommy tons and tons of purrs!

Oh no! Now I have that dratted song stuck in my head!!!

That song is one of my favourites both because of the words and because Neil Diamond made such a fabulous job of singing it. Anyway, it's cute that the cats like it too...

Oh I remember that song so well and it surely does fit that picture!

I love the connection between the song and your post. Way to elevate an already cute picture!

That is such a wonderful photo! And what a lovely post. :-)

Great song for a great picture. I just love how Winnie is looking at the camera and definitely seems to be thinking about the words to this song. So percious.

This is just the sweetest picture! It is is always so nice to see the love that cats share for each other.
Tommy you look quite peaceful, and winnie what a wonderful sister you are.

What a lovely photo, it emphasizes such great compassion between the two...oh we beans have so much to learn from our kittens...

That is a great song to go with a super picture. It is so much fun when two kitties get along so well, especially brothers.
Have a super day.

Aw, that's just purrfect! What a sweet picture of Winnie and Tommy. :)

Hmmm I'm curious about this song, I will ask mommy to search about at youtube.Adorable picture, really lovely!
purrs and love
Luna - We love LUNA

So sweet! None of my cats will lay together...not even the two sisters! It is weird.

That is a sweet picture. I know all about kitties snuggling with each other. It's adorable.