Hard pillows and headrests, often made of wood and others, have been used in various cultures throughout the world — in China, Africa, India, the Pacific Islands, and elsewhere.
According to Chinese tradition, a pillow could give special qualities to the person who slept on it. A folk medicine recipe claimed that sleeping on a hard pillow filled with herbs and other substances will help hearing and sight grow clearer, attain better health and have pleasant dreams.
Porcelain pillows was also noted to offer soothing coolness during hot weather. However stoneware too would offer that same coolness.
Such hard pillows were commonly used to help preserve the elaborate hairstyles that were so fashionable during those ancient times. 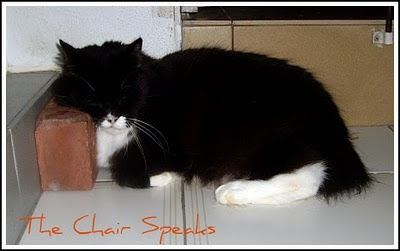 Now, is Tanya using this brick as pillow for better health, soothing coolness or maintain her elaborate fur-style?
Posted by The Chair Speaks at 8:30 AM

I love all these old superstitions. Amazing what imagination we people have! Wooden pillows don't sound like much fun though. Have you ever tried one?

:) No, have never tried as I sleep without pillow. Don't know why but ends up with stiff neck when I use one. :)

Very interesting info on hard pillows...cats must know lots of things we don't!

Cats they sleep any where that feels
cool or warm depending on their needs at the moment. When it is warm
my cats always find the cool cement or bare floors to sleep on! What a smart kitty you are Tanya! :)

LOL what cool post!!!
This picture is really precious, I think I would prefer try another kind of pillow, for instance mommy's pillow! LOL
It's good because I can feel her perfum! :)
Happy Tuesday
purrs
Luna

Only can see her cute cute nose and mouth when she is asleep!

Hahaha Tanya is being superstitious! Well we'll not lose anything if we follow them, right? I like hearing old superstitions, here in our countries there several of them, which we sometimes follow and sometimes not!

They say when kitties grooms themselves, a visitor will come.

When someone kills a kitty, bad luck will come.

When a kitty gets wet, it will rain hard.

she is a very stylish kitty and knows such amazing beauty secrets used by ancients!

what a wise kitty!

I think Tanya used it to maintain her elaborate fur-style...look at how gingerly she placed one side of her head on it... :)

I say all of the above! It is amazing that cats can sleep on hard things, rock and wires, etc. Very interesting. I wonder if there is any merit to them?

LOL, great info on pillows and sure glad Tanya is listening because we sure don't want her to ruffle her fur. She is going to be healthy too. That really is good information. Our mom needs to get a brick for a pillow.
Have a great day.

Usually the Chinese are often right in health things, but the stone pillow I have to try first, before I can tell my opinion and if I agree with Tanya, I first have to try it out, lol !

Such a cute pic! My Mimi is spoiled rotten, she uses my head as a pillow lol. Whenever she sleeps with me it's never next to me or at my feet but right on my head. Maybe she likes the smell of my shampoo? Happy COT!

That is cool. Your blog makes me forget my insomniac state. I do need a hard pillow filled with herbs. Isn't Tanya very lucky?

I can't reply to your comment in my Main blog. There is a blockage for some reason.

Thanks for the visit which I sincerely appreciate.

Adorable picture--I'm not sure I'd want to sleep on such a hard picture though!

Interesting post; very cute photo!...We're not sure way, but know Tanya has her reasons for the hard pillow!...Happy week sweet friends...xo...Calle, Halle, Sukki

LOL! Tanya, what gives? That just doesn't look comfy. I guess you want to keep your gorgeous fur style.

OH Tanya will never give her secrets away!

I think it is to maintain her elaborate fur style. She's adorable no matter what the secret is!

Dear Friend ,I use the zoom sometimes.

Such an interesting post! We're not sure why Tanya is using that brick as a pillow, but she must have her reasons. :)

For whatever it's worth, she does look very comfy!

Is it cozy? there is no explanation for why cats do what they do.

Tanya must be a hard core sleep, It is strange that she found hard brick gave her a good dream : )