All in the Room

An ex-classmate, Linda, asked EJ, "Have you ever taken a picture together with all your cats?"

EJ explained that it would be difficult as the cats could not be gathered to sit or stay still in the same room at the same time.

There was once recently and only once when all the eight cats were in the same room. And EJ managed to catch it.

It was during a heavy thunderstorm with lots of lightning and very loud thunder. The house electricity tripped several times and kept EJ busy walking round the house checking for roof leaks which is the best time to check.

This was when EJ discovered that none of the cats were at their yard. Though the cat yard is indoors, it feels outdoor as the sunlight can come through and at certain parts the cats can see the sky through the transparent polycarbonate roof.

Perhaps the cats feel more safe in their room. Can you see all eight of them? 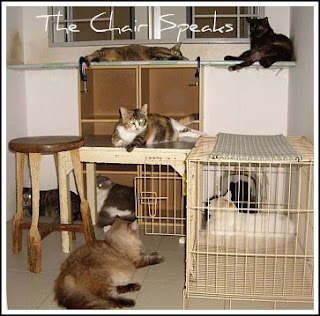 In another thunderstorm, as usual the two biggest and supposedly macho man-cats went to hide in their room.

Though the female cat, Pebbles, was sleeping in the cubicle before the storm started, Tommy didn't care, he wanted to squeeze in.

All he managed was just his fat rump shoved in with the rest of the body outside. Poor Pebbles was looking rather uncomfortable. The next cubicle was occupied by Tortie who is even afraid of a loud sneeze. 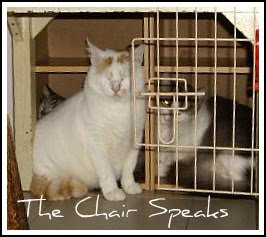 Awww how sweet. I have loved cats all my life and had them. No one likes them ,but me.I have two now,but the hubby still fusses. Oh well if the go I go hehe1
love the photos.

Ahhh! Being together halves the scariness!

That's a nice picture ! I also have only one picture where they are all together on my bed ! It was pure coincidence and never happened before or after. That's nice to see them all together !
Lisa's lump seems to be a goiter, something with the tyroide, but not dangerous only a beauty matter. My friend said it's even nice it makes her little face look rounder !

Adorable post, I think to be all together makes the day much more happy and full of lights!
purrs and love
Luna

Great post! What a chance I have a picture today with all cats in my kitchen ;D
Our cats are also afraid of thunderstorms but they don´t like it to be in the house then.
Now it is very cold here and they all stay at home.
Happy Tuesday!

That's a great pic. I only have 4 but I know I could never get them all together as the two mancats really don't like each other. Happy COT!

It's a wonderful picture. Every one of them are beautiful. I love the very last picture the most.

You cats are so lovley, full of life and look well taking care of!!!

Now, that is awesome! At most, I've gotten *one* picture of five of the gang together. I don't think it'll ever happen with six because Indigo refuses to get within 10 feet of another cat.

Total counted Eight! :) I have trouble getting two in a picture
sometimes and then it's sheer luck
if they are looking at the camera!

What a great capture!! My cats would love such a set up!

They are gorgeous!! I don't feel so bad with 6 now. You were right about the comment about my Lovey's feet looking like ancient Chinese bound feet.

How sweet1 a family portrait! Tommy cracks me up! His eyes are closed so I suppose he feels safe.

What a lovely post...
Thank you so much for visiting my blog :) I just added you as "my blog list"

What a super picture of all the cats in one room And I did find all eight. I don't think I could get all the cats here in the same room at the same time. And thanks so much for visiting my blog. You have some beautiful cats. They all look so happy.

Great shot of everyone, though I only counted 7.
cindy

Super captured.
The only situation we can take a photo of our Cats (for sure) - is when we wait a long time for servingdinner - haha.