It has been a year. Cinders would have been 19 last week if she were alive.

Being a geriatric cat, there were many changes in her life, physically and mentally. When the end gets nearer there are a number of subtle signs displayed.

In her last few years, she was less active and moving slower, preferring to rest on top of the chair or podium watching her younger roommates interact. She could no longer spring up from lying position. Perhaps she was feeling the effects of arthritis.

Then her eyesight deteriorated and became disorientated. She relied on touch and hearing, and began walking along walls ending up stuck in small gaps and spaces. To prevent that, EJ put thick books, dictionaries and plastic containers between cupboards, next to the refrigerator, washing machine, etc.

The disorientation moments advanced to dementia.

In her last few months, her vet detected low body temperature and advised to keep her warm.

She did not use the litter box and had to wear diapers. Her water bowl was elevated to make it easier for her to drink. 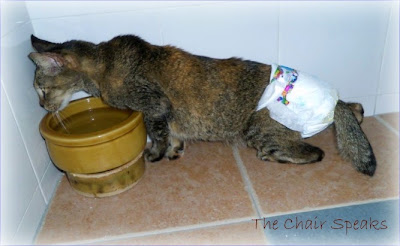 During her last few weeks, she refused to eat, drink and take her medication. Breathing was difficult. 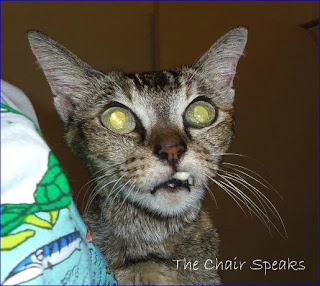 Cinders just clamped her mouth shut on that pill and refused to swallow. That weird reflection in her eyes indicate total blindness.

We hope this post will bring awareness to friends, readers to help better prepare and ease senior pets on the final leg of their life's journey.
Posted by The Chair Speaks at 3:20 PM

Poor Cinders,
But one thing I know she has been loved and took a good care by you , EJ

Thanks for sharing, I think this post is hard for you too

Many Hugs from me & mom
xoxo

Thinking of you on this sad anniversary and sending purrs and hugs.
***
I used to belong to a number of cat groups on Yahoo, and one member, a breeder in the UK, always said that when the bad days outnumbered the good, it was time. Quality of life is everything, IMO.

Those are some good points. Big hugs to you on the anniversary of Cinders. She was a fighter right till the end. Take care.

Cinders was a very special girl and she knew how much you loved her and you gave her a beautiful life.

Lovely Cinders! It's great and comforting to know she was in a most loving and wonderful place during her last days. Take care
x

Oh it's tough getting old! That's what the mom says.

We send you purrs as you remember Cinders today. We can see how much you loved her and took great care of her.

Purrs and hugs from all of us here. We feel that love for beautiful Cinders.

I know how you feel. My boxer passed away two weeks ago. Take care!

Poignant post and will surely be very useful to pet owners

It is so hard watching our pals age more quickly than us. You honored Cinders so well during her late years by taking care of her so thoughtfully and with dignity. Bless you.

OH how many tears my mom shed over her baby Admiral in her final several months. Cinders, we miss you sweet little girl. xoxoxox

I remember Cinders well..my cat is poor at moment

Oh, E.J., a year already. Poor Cinders.
Our Lindy is having some difficulty seeing things close to her, although her distance sight doesn't seem to be impaired. I think my husband is in denial, because he agrees to phone the vet but then doesn't do it. It's very scary for him, because he and Lindy love one another so much. It's also a bit difficult for me, because I love them both.
K

Cinders was a special kitty and you took care of her so well with love, the most important part.

My old Molly was nineteen when she died and had many of the characteristics of Cinders that you describe. We love them so desperately, but they do let us know when it is time to go. Sweet Cinders will never be forgotten.

Sending you love and ((((hugs)))) about dear Cinders. Couldn't bring myself to read the entire post because I didn't want to relive the end of my Angel Bobo's life again :(

Thinking of you and missing Cinders too.

Makes me think of dear Jenny. She was one of the original Funny Farmers and still very much missed. But what great memories these furries leave us with! Hugs. I know you're missing your Cinders.

The Furries of Whisppy said...

Cinders was loved, right to the very end. :)

Thinking of you all, dear friends. And of dear sweet Cinders, who is free and whole once again, and forever in your hearts until the day you see her again.

Sending you lots of big, warm hugs sweet friend. You took great care of that sweetie all the way to the end. She loved you very much. It is really hard to see them go but they always leave us with some wonderful memories.

Comforting purrs to you as you remember dear Cinders.
Those are very good observations as our humans need to be aware that older cats need extra care
Purrs Tillie and Georgia,
Treasure,Tiger,JJ and Julie

My contract with sorrow has a long way to go yet. Hopefully.

Our kitties stay in our heart forever!
Hugs!
xo Catherine

What a touching post ! I experienced this several times when my cats got close to 20, but I never waited so long to take the big decision to let them go. But they stay always in my heart.

We are sorry we have not been visiting. We lost our beloved angel Abby on August 12th. Seeing this post brought back much of the things you shared. Her brief journey into illness was quite short, so I could not take it all in. From her first episode to the last day of her life was a mere 15 days. We miss Cinders and we can understand how bittersweet of an anniversary this was.

Dear EJ, my heart goes to you on Cinders anniversary but she is in a better place. I know the feeling because I too lost 2 cats though one was due to an accident and the other because of an illness. But the grief remains the same I think - I will always think of them and wish things had been different. Thank you for sharing with us the signs of old age in cats. I have 2 old ones now - both more than 10 years old and appreciate knowing what to look for when the time comes.