Oh, our human procrastinated again. A few paw strikes did the trick!

These were Kenggy's first few photos taken. It was after her spaying operation resting in her private suite for recuperation in early January 2007. 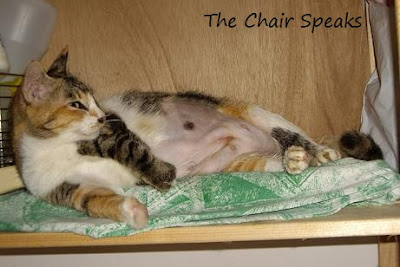 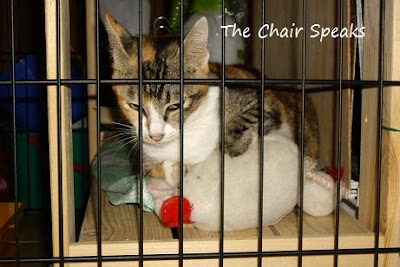 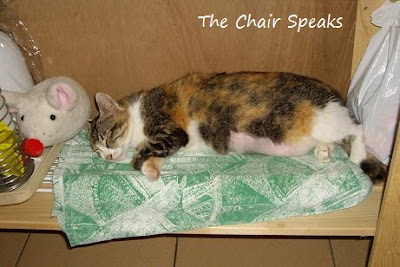 She actually joined EJ and the gang in late December 2006. EJ could not remember the exact date but was certain that it was on a public holiday and so it could be possibly Christmas.

Kenggy has recovered extremely well after her recent operation to remove a growing lump on her mammary gland. The fur shaved off on her belly has grown. Our human has been checking if there are any more growths or lumps. So far, there are none.

We thank you all once again for the many wishes, kind words, purrayers and headbutts.

Have a great weekend everyone!

Posted by The Chair Speaks at 1:00 PM

Oh, this is wonderful. We love Kenggy. Lindy is a purring kind of dog, so she sends purrs.
—Kay and Lindy

Kenggy is such a beautiful girl. We are glad to hear she has recovered from her surgery and no more lumps have been found.

The Furries of Whisppy said...

Hi Kenggy! We are so relieved no new lumps have been found. Lumps are so scary.

Hello Kenggy we are so glad you are recovering so well.

Brave Kenggy to recover so well from your surgery. We send salutes and purrs.

So happy that Kenggy is doing well! She was born one year before Cody!

Such a pretty Ladycat and we are all sending our best purrs to her.

We're happy to hear that Kenggy is doing so well!!

We are so happy to hear this news. Stay well and do good sweet Kenggy. Hugs and nose kisses

We are so glad Kenggy is doing well. We continue to purr for her.

I am happy that Kenggy is doing well. I think she is a lovely ladycat. xox

Oh Kenggy, we are so glad that there are no more lumps. Great news. You are such a pretty girl. Hope all of you have a great day.

Hari OM
Oh what wonderful news and a delight to see these pretty pictures of Kenggy. May health continue. Hugs and purrs, YAM-aunty xx

Beautiful Kenggy!!! We hope you continue to get better!! Enjoy your rest! Take care
x

HURRAH for Kenggy! We are purring she stays smooth and lump-free from now on.

We send positive vibes and healing purrs to Kenggy :)
We love the old pics too. She is a lovely kitty!!
Purrs Tillie and Georgia,
Treasure,Tiger,JJ and Julie


so wonderful to learn Kenggy is doing well - so much praying that Kenggy will stay well!

Pet lovers please check out my homeless cat blog archives for some informative posts and stories about the cat abandoned/feral colony I manage.

Kneggy is so beautiful. WE are glad that no new lumps have appeared, and that she is recovering so well.

We are so happy to see that Kenggy is recovering well after the surgery.
Luv Hannah and Lucy xx xx

Woof, Kenggy is OK!
And I am woofy glad.