The magazines were collecting dust. Some were old issues published in 1974.
EJ decided to go through them before giving it away but will keep a few.
Cinders came to help sort the magazines.
Here she is trying to blend in placing herself in an empty magazine filebox. And she looks like a mini trophy head mount, doesn't she? 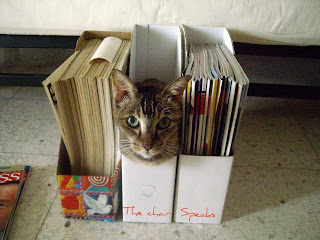 That's such a cute and funny picture ! cats are really very helpful !! hahaha !
I have no access to my Google account ! No gmails and no Blogger, very annoying ! Asked now for help hope it will be settled soon. It's the first time I have this problem since I started in 2006 !

That is just too cute! Looks like something I'd do!

Ahh, so adorable! What a great photo!!

You have a stamp on the blog for you:
presentesloga-2 (selinhos)
Go there to get your birthday gift
Ronrons of
Kika

What is the name of that magazine? Cutest Cat?

Cinders, you must be a tiny cat to squeeze yourself into a magazine box! Wow! Great shot!

that photo is too cute!!! Love it!

I think it is "Cat Fancy"

Awwwww what a brilliant photo!! Awwww Cinders you are just so funny and so lovely!! Me and Charlie hope you enjoy being a kitty mag!! LOL! Take care
x

Cinders you look so cute in your magazine box - we hope Cinders is on the keep list!!

Well, this just made Mommy's day! How in the world did you get IN there?

Oh I love it. I need to do that and make everyone smile the way you're making mommy smile.

My Goodness,
how come Cinders could get inside?!

Woof, ForBarkingOutLoud, Cinders you are number one in my fashion trophy!

Keeper Lui did the same thing with her collection of Mega, a local glossy mag she kept from the 90s and had to let go because there simply was no space!

I mean really, where would we put all my new toys, right Tanya?

hehehe wow Cinders, what a place that you have found to take a nap!
Amazing and beautiful shot!
purrs
Luna

MOL, how did that kitty fit in there. That is amazing but not surprising.Cinders that is well done.Take care and have a great day.

EJ, I'm loving ur photography as you know best when to capture special moments like this. Your photos are all really impressive :)

That is the cutest darn photo!

hahaha, that's so CUTE, Cinders peeking out! Love the photo! :)