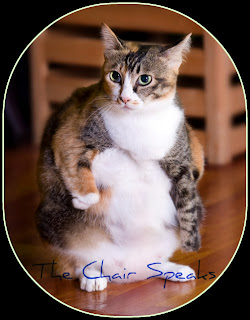 The cat was bleeding by the roadside.


A young couple passing by saw this bleeding cat already without its two front paws with a newborn kitten. They decided to help by taking both the mother cat and baby home.

Home for this young couple is shared with rescued cats. They pick up strays and get them adopted.

Kenggy was so named as without two front paws, she would stand balanced on her hind legs to look at the world around her -- like a kangaroo. Kenggy is short for Kangaroo.

A few months went by. Kenggy's kitten and other rescued strays got adopted but not Kenggy. Most adopters prefer cute kittens to adult cats, what more an adult cat without two front paws.

While checking an animal forum, EJ happened to read a posting about Kenggy and that she would be put back in the streets if no one wants her.

EJ made a decision to adopt Kenggy on the condition if Kenggy was willing. Contact to the young couple was quickly made and EJ went on a long drive to have a sniff-out with Kenggy.

During the sniff-out, Kenggy waddled across, stood up and looked intensely eye to eye at EJ who was seated cross-legged on the floor. Kenggy seemed to know what was the sniff-out about. When EJ got up to leave, Kenggy tried to follow. So Kenggy has decided. EJ was pleased.

And Kenggy came home as part of the gang on 10 January 2007 after her spaying operation, vaccination and check-up.

Kenggy is gorgeous. I'm so glad you saw the posting about her. Life on the streets is not the right life for her.

This reminds me of Captain Jack Sparrow Hawk...how no one wanted him as he is blind in one eye. I'm so glad he, too, found a good home with you. :)

Thanks Blackie007 for your compliment. Kenggy is a very good girl. :)

That is so sweet! Kenggy is gorgeous!

I am so glad you and Kenggy found each other. I am so glad that kind couple rescued her and her baby kitty. Bless all your hearts and big furry hugs to this special furry baby!

EJ... Thank you for your love and care to Kenggy... You are a life saver!

This is such a beautiful & touching story.... Found your site through Blackie's ^_^ Kenggy is so pretty and happy for her now :)

Just that there is 1 thing i could not figure out is, why there are so many 'pawless' cats around lately? Kenngy, Lucky & my Nisha gal.... Worried for our four legged friends out there on the street :(

Thanks for the link to your touching story! I enjoyed this..love a happy ending (nothing's quite over yet is it) lol))-
My best, Regina-