More than 40 years ago, EJ and siblings wondered whether their fat cat, whom to their eyes had a silhouette of a miniature elephant, could go inside mom's narrow-necked ceramic jar or get stuck trying to get in. The very thought of how hilarious it would look with its fat rump sticking up and legs kicking in the air gave them courage to try out.
First, they made sure mom went out. Then they took that narrow-necked ceramic jar and placed it in the middle of the hall.
Yeow-Yeow, yes, that was the fatty's name, resisted when they tried to put his head in the jar opening. EJ and siblings laughed at the comic sight.
When put down on the floor briefly, fatty got fascinated and started peering in. They tried again and fatty went in after some leg kicking in the air.
Peering inside the jar, fatty could not be seen. It was dark inside. Colour of that jar (which was almost similar to the one below) did not help as it was deep brown almost black both outside and inside. 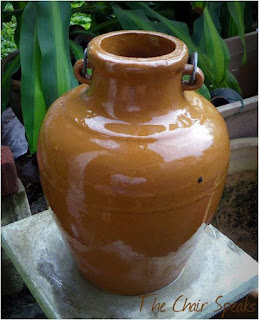 Fatty stayed in for so long and was so quiet that EJ and siblings panicked. They thought they had to rescue him by breaking Mom's jar.
Luckily fatty got bored squatting in the dark and popped out. Can you imagine how relieved EJ and siblings were. That jar was quickly put back in its place before mom came home.
EJ thinks fatty is number 3 here. Cat on the floor was fatty's mother, Meowmy. 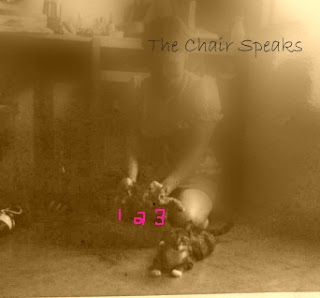 ohmigod, what a story!It's a relief they didn't break Mom's jar!
Adorable post, thanks for this light to our Sunday here!
purrs and love to you all
Luna

phew.... that was scary indeed!

Silly kitty. But cats do have to check things out. Glad he popped out of that jar. Bet it was really scary. Have a super Sunday.

Glad the cat enjoyed the jar and was able to get out okay!

Thank goodness there was a happy ending.
Luv Hannah and Lucy xx xx

That sounds awfully scary but it must have been a fun time to stay that long!

We could tell that story almost had a very different ending. Good endings to stories are the best, right? Whew! Lucky day! Thank you for following our new blog, we are now following yours. Hugs and nose kisses

Good thing Fatty was able to get out of the jar!!

Yes, I'm glad there was a happy ending, too!! Always amazes me the spaces that cats can get in and out of!! Fun post for the day!!

I am so glad that was a happy ending. xox

Whew! That was a close one...so humans enjoy being naughty? Interesting.

All's well that ends well. So pleased there was not.
One broken jar.
One angry mother.
One very annoyed cat.
A group of sorry children.
I like the happy ending.

I love your blog already! It's only been less than 1 minute though!

EJ that was hilarious and cruel if Fatty was not able to get out! Haha!

This is nether here nor there but our Walker modern art museum is having a cat film festival on their lawn this Thursday. A compilation of internet videos and such. I'm sure there will be plenty of cats stuck in small places. I can't wait!

What a great story!

What a great story! We are glad that Fatty was able to get out of the jar!

Looks like if Fatty could get in, he could also get out.....but some tense moments while he was deliberating!

The things cats do when you are not watching!

My goodness, poor fatty ! kids sometimes are very creative to have fun, but apparently it didn't harm him and the vase neither, lol !

The things kitties and kiddies do! Lucky for everyone there was a happy ending. How cute!

Glad Fatty came out on his own and they didn't have to break the jar!!!

That was some adventure! And glad that fatty found a way out of the jar!
Have a fabulous day :)

I'm glad everything ended well. I probably would have went into a panic and broke the jar immediately!