Results of Tommy's second blood test was worse than his first. His kidneys worsened considerably. Additional meds was prescribed and dosage increased.
During his check-up, Tommy's favourite doctor listened long and hard at his heatbeat. Tommy had a 'gallop rhythm'. Normal heartbeat goes 'lup dup lup dup'; Tommy's enlarged heart went 'lup lup dup dup lup lup dup dup'. It did not beat in sync.
Yesterday, in the early morning, Tommy's tired heart succumbed to its weariness and gave up.
Usually gregarious Tommy was the one who would let others use him as pillow but for the first time a very thin Tommy borrowed Kenggy's fleshy rump to rest his head. 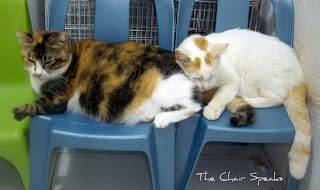 Posted by The Chair Speaks at 8:46 AM

Oh no! We send you soft purrs and prayers for the loss of Tommy...it's so hard. Love to all, Trish and the Kats xx

awwww poor tommy...he is always a happy dude for being with you and you giving him all the love... :)

Poor Tommy and EJ
I am sending a ton of purrs and pray for both of you.
Hugs and Kisses to you and Tommy
Best of Luck and please take care
xoxo

Oh, EJ, I'm so very, very sorry. I know you did your best to save dear dear Tommy because you loved him so much.
The good thing is, he knew he was loved.
The photo of him resting on Kenggy's "fleshy rump" is absolutely wonderful.
Thinking of you — K

We send our softest purrs to you and we will keep you in our prayers.

you certainly do all you can - I have one that is going downward - no energy like me farewll sweet Tommy..sandy

:((,that's sad to hear, I hope Tommy would feel soon. Cole and Petunia would pray for Tommy.

My sisters and I are so sad to hear about sweet Tommy and we send many, many purrs and hugs.

OH Tommy! :-( Me and Charlie are so so so so so sad to hear about this. We are sending you all lots of hugs and many many purrs! We are so sorry and very sad. Take care
x

Precious dearest Tommy. Mommy and I are so so sorry about his passing. Our eyes are leaking and we will be ourring for your comfort.
xox

I am so sorry! I have been away from blogging for quite awhile and didn't know he was ill.
Sending purrs and prayers your way.

Poor Tommy. We are so sorry to hear that condition has been worsening :(
We're sending lots of healing thoughts and purrs.

So sad news!I'm so sorry!I'm sending love and lights to sweet Tommy.
Luna

I am so sorry for you ! Kidney disease is typical for cats and unfortunately there is nothing to do. I went through that 3 times during all these years I had my first cat. At least he doesn't suffer anymore.

We are so sorry to hear this sad news - we know you will all miss sweet Tommy very much. He will be watching over you all with love from Rainbow Bridge.
We are sending gentle headbutts and kitty kisses to you all.
Luv Hannah, Lucy & Mum Sue xxxxxx

Poor, poor Tommy. Hang in there! EJ too.

We are so sorry to hear about poor Tommy. We're sending you our gentlest purrs.

I'm sorry for your loss.

That's so sad. I'm sorry to hear that.

It just breaks mine and mommy's hearts. xoxoxo

We are so sorry to hear about Tommy. We sure are sending tons of purrs and big hugs to the Mom. It is sad when one of our fur babies leaves. But there are lots of kitties to greet him at the gate. Sorry to hear this.

I am so very sorry to hear about Tommy. I am sending love, and purrs from Milo and Alfie.

It makes mommy's eyes full of tears thinking about that precious boy. HUGS to you. xoxox

Sometimes, we simply have to let go instead of our loved ones bearing such pain. Sweepy and Sumo are in their senior years too and I am praying that when the time comes for them to go, they will quietly and painfully sleep the way Bogart did...

We love you EJ and everycat.
And we are just here if you need us.

Hugs and do take care of yourself.

EJ, we are so sorry to hear of Tommy's passing. we are sending our humble purrs and prayers of comfort.

so sorry about tommy but am sure he is in a wonderful cat heaven...

Our sincere condolances over the passing our your precious, handsome Tommy; we know how much you loved and cared for that sweet boy, EJ...Wishing you comfort at this sad time, wonderful friend...Always loved, never forgotten, forever cherished...big hugs...J, Calle, Halle, Sukki

We came by to thank you for your suggestions for Chica. We are sooo sad to hear dear sweet Tommy has gone tot the Bridge. Sending lot soft purrs of sympathy to you in your loss.

KC and the Giggleman Kitties said...

We are so sorry to learn that sweet Tommy ran off to the Bridge.
Love & Purrs,
KC

EJ, we are so sorry to learn of Tommy's passing to The Bridge. He was a grand mancat. A lovely boy. We send you love and rumbly purrs to comfort you

So very sorry for the loss of your sweet Tommy. Kidney disease is a hard road to travel. Love and light to you.

We're sending lots of purrs and purrayers out to you!
Bengal Trio

We are also sorry to learn of Tommy's loss. We send purrs and tail wags to his family, knowing you are missing him greatly.

We just heard about Tommy's passing. We are so sorry. We send you comforting purrs and headbutts...

Oh no, I am so very sorry to hear about sweet Tommy. My sisters and I send you our best purrs and paw hugs. Our whiskers are weepy wet here. Run free sweet one.

We are so sorry that Tommy's heart was all used up. We are sending you tons of purrs and purrayers at this difficult time.

Hugs, Us and Maw

We're so sorry to hear about Tommy. Puurrrrs and purrrrayers to you all.

We are very sorry to hear about Tommy. Sending you our sympathies, thoughts and purrs.

We send you headbumps and gentle purrs of comfort on the loss of sweet Tommy.

We are so sorry to read about Tommy.
Sometimes, it is just time for an angel to return home.

Kiki is also unwell, on and off. We are giving him lots of love and comfort. He has his good days and bad days. On good days, he loves to eat raw chicken, on bad days, he doesn't eat at all. He is very skinny now ...

We are so very sorry to hear about Tommy.We are sending you comforting purrs. We are sure our Mickey will be there to welcome him to the Bridge.

sending snuggles and purrs at this difficult time.
3 Kats and a kwilter (Taz, Runt, Charles and mommy, Anna, in IL)

So do not want to compete!
Are you ashamed to show your belly?
I already have 40 bellies, but also want your
I'm waiting for the mail
Ronrons
Kika

Really heart breaking to hear this... Oh Tommy, we will all miss you...

Dear Ej and dear Tommy, my heart goes to both of you. I know it's terrible to lose a beloved cat but at least he knew he was loved and is no longer suffering. My prayers to you and all the cats.

O dearest Tommy! His beauty and sweetness will always be with you! He is a part of you completely now! And now he is pain free!

Namaste to you all from Shadow!