Despite appetite stimulants, Cinders still refused to eat. Her weight dropped rapidly from 2.68kg two weeks ago to 2.5kg last week and now 2.34kg.
Special food AD formula (AD stands for anorexia diet) could not entice Cinders to lick from EJ's finger. Feeding via the syringe was messy resulting with most feed flung all over instead of inside Cinders' mouth.
Lately EJ resorted to forcing wet food like mashed tuna and AD formula down her throat. Each time only a 'nail-sized' amount could be consumed. Cinders fought violently and pawed seconds and thirds.
During the visit to the vet this morning, Cinders was a good girl when blood was drawn from her carotid artery. Some tests were done immediately. Her glucose level was normal meaning she is not diabetic. She is also FeLV and FIV negative meaning she does not have feline AIDs or leukemia. The rest of her blood was sent to the lab and the results will be known next week.
In the late afternoon, not wanting to waste an opened can of chicken kept in the fridge, EJ decided to heat it for the other greedy cats who had been clamouring and meowing for Cinders' wet food. Suddenly EJ found Cinders at the foot looking up hungrily. And gave it to Cinders.
Cinders ate!
EJ was so happy and promptly phoned the vet to say, 'She is eating! She is eating!'
Cinders received all those get well purrayers and wishes from world-wide blogger friends and all who did. EJ would like to convey many thanks to them all.
Right now late at night, Cinders is resting behind EJ as EJ pounds the keyboard to post this.
These photos are Cinders' second round of eating -- at night. 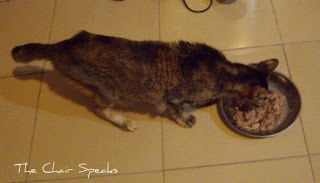 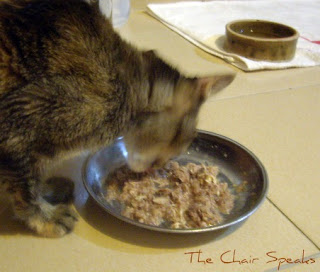 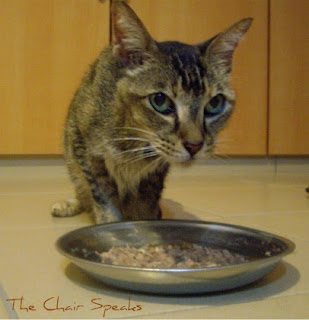 A short break between slow eating.
Posted by The Chair Speaks at 11:57 PM

This is good news that she's eating, though we admit it's a shock to see her so thin, to be honest. We hope she does continue to eat so she can gain back her weight, poor sweetie. Continued purrs, purrayers and Light from all of us.

She is so thin - poor Cinders. We are glad she ate some. Sending lots of purrs.

FWIW, our Food Source has used sliced deli chicken for force feeding. Take a little piece and stuff it down the kitties throat like a pill. It was got Allie started eating one time.

Good job with the eating, Cinders! Please keep it up!!!

We continue to send our purrs and prayers for you all...

Oh my stars!! Cinders, beautiful Cinders, keep eating, eat, eat, eat!! Me and Charlie are sending you mega mega purrs and hugs!!! Please get better Cinders!! You are such a fighter, so brave!! Take care
x

Sweet Cinders, we are all so very happy to see you have something to eat! Make us smile some more!!!

Oh we are so glad that she started eating. It is so hard when they won't eat. Good girl Cinders and keep it up. We are sending tons of purrs and we all have our paws crossed for you. Take care.

purrs and prayers that Cinders continues to eat....poor baby xoxo

COD !!!! Cinder !!!!! You are too skinny !!!
And Thanks Thanks Thanks you do eating !
I proud of you ! Keep it up for your mommy. You got no idea Cinder, how much we so worried about you.
Paws Crossed with my heart and more purrs for you.
and hug ..hug..to your mom
xoxo

You gotta fight this and be strong!

P:S: Darkie is the same too. He has lost so much weight and very fragile.
He has been staying indoor with us for weeks now, I don't think he can survive outside...

I am so glad Cinders decided to eat - I do hope the tests come back ok. Posky is at the vets tomorrow for a urine test, he has CRF and they want to see how much protein he is losing.

get well sooooon cinders...
holding good thoughts for you

Hoorah for Cinders eating her chicken dinners. Hope she will carry on noming.
Luv Hannah and Lucy xx xx

Good to see you eating, Cinders! We're holding good thoughts for you and hope you're feeling fit as fiddle really soon!!!

come on back Cinders!!

Yay for Cinders! Eating is very important. I know how scary not eating can be after going through it with my cat, Moe. Glad Cinders is eating again.

Stopping by from pet Pride.

Keep on going Miss Cinders...we are still here purrin for you all the way from Florida!

Oh my goodness, how heartbreaking...keep eating Cinders and get big and strong you sweetie. My thoughts and prayers are with you!

I'm amazed with your blog. It is very nice now. Wonderful! :)

From the girl who used to be next door :)

KC and the Giggleman Kitties said...

Cinders, Mommy and I send you such love and prayers

It is good that she eats!