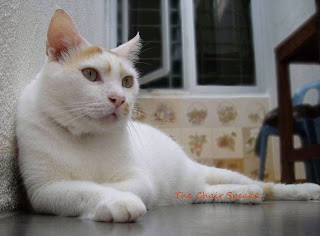 EJ had a pleasant surprise, a visit from a gang of four white and red kittens, more than 10 years ago. It was not known whether they were born in the house or was brought back by a young couple who lived a few doors away.
Occasionally those cute kittens would sneak by for a short visit. As they grew, they were allowed to roam. Though Tommy was not the best looking or cutest of the lot, he was the most recognisable as he was the fattest. It was found out later that he was the fattest because he was the greediest.
First the kittens roamed the neighbouring houses but still along the same street. Slowly the roaming became farther and wider. And they gradually mixed with other stray cats and made friends with them.
Before reaching adulthood, two of Tommy's siblings succumbed to diseases picked up from the strays. One almost reached maturity but was killed by a speeding car. Tommy was the only survivor.
On reaching adulthood, Tommy continued his wandering ways and covered several housing estates. Being in the prime of his life, he was strong, solidly built and good looking. He had countless girlfriends - everywhere.
To confirm that it was Tommy, EJ on the way to work in the mornings, taking a short cut through several housing estates, yelled his name from the car. Tommy responded. Sometimes Tommy was seen with his stray lady friends. At other times he was alone walking probably seeking out his friends. But he still went 'home' and dropped by EJ's house for a quick hello and treat.
There were times the quick hello would be longer when Tommy needed help for his wounds probably from the fights to win and prove his worth for his lady friends.
Then one Chinese New Year, Tommy came. Hardly recognisable, he was dirty, continually sniffing from a runny nose, sneezing non-stop, had teary eyes with numerous wounds on his body and extremely thin - so thin that the biggest part of him was his head.
Tommy mewed for help. Now how could one turn down such an appeal at this sightful plea? So off he went to the vet. On the consultation table at the clinic, Tommy purred obviously enjoyed the amount of attention he got.
He purred even when given an injection much to the amusement of his doctor. Tommy was confined to an enclosure and took a month to recover. Through several visits to the vet, medication and care, Tommy began to fill out.
He was never allowed to roam again and never allowed to return to his 'owner'.
Now the biggest part of him is his belly. 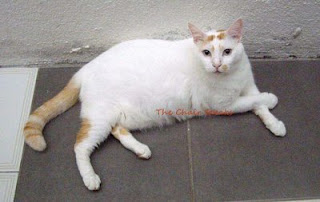 How wonderful for Tommy to find such a great home.